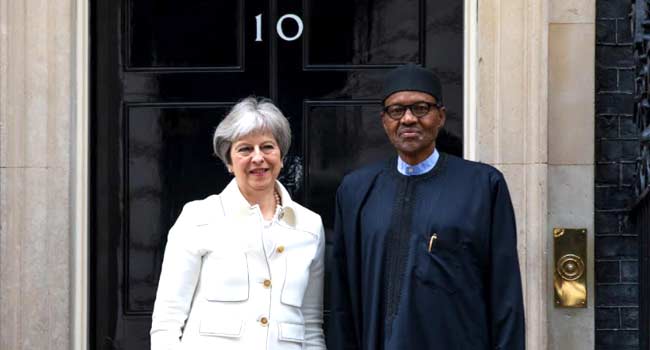 While politicians are preoccupied with the forthcoming general elections, President Muhammadu Buhari told British Prime Minister, Theresa May, that he is more concerned about the security of the people and the growth of the Nigerian economy.

The President said this on Monday when he held a bilateral meeting with the British Prime Minister at 10, Downing Street, London.

According to a statement by the Special Adviser to the President on Media and Publicity, Mr Femi Adesina, the three-pronged focus of President Buhari’s administration resonated through the conversation.

“We campaigned on three major issues, to secure the country, revive the economy and fight corruption,” said the President.

“We have elections next year, politicians are already preoccupied with the polls, but I am bothered more about security and the economy,” he stressed.

President Buhari further recalled that Nigeria and Britain have a long history of cooperation on several fronts.

According to him, people ought to know how they arrived where they are if they would move forward.

The President acknowledged that it was a mistake for Nigeria to have stopped the teaching of history as a subject in schools and promised that the Federal Government would return it to the curriculum.

Highlighting the importance of education, he revealed that his administration was making more investment to improve the sector.

“People can look after themselves if well educated. In this age of technology, education is very important. We need well-staffed and well-equipped institutions to move into the next generation,” President Buhari said.

In her remarks, Prime Minister May said Britain would continue to work with Nigeria in training and equipping the military.

She was particular about the abduction of the schoolgirls by Boko Haram terrorists, noting that her country would continue to give Nigeria the needed assistance.

The Prime Minister, however, commended President Buhari’s administration for “making good progress on the economy,” and urged it to maintain the focus despite approaching elections and the increase in political activities.

She also noted: “Good grounding in education is good. It is important to equip young people for today’s world. It is also a good bastion and defence against modern slavery.”

May, who observed that President Buhari has been doing much to improve trade and business for Nigeria, said it was also time to boost intra-commonwealth trade.