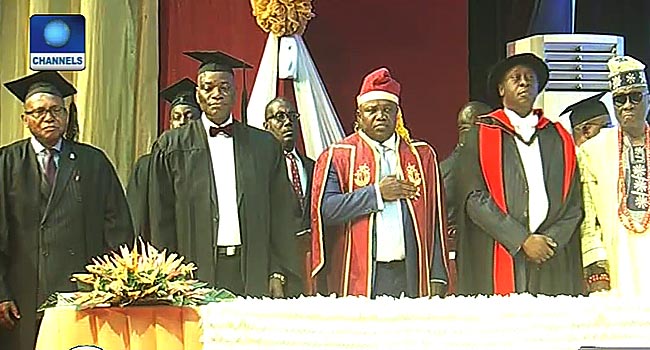 The University of Lagos (UNILAG), is currently holding a convocation lecture as well as an inauguration ceremony of Professor Oluwatoyin Ogundipe as the 12th Vice Chancellor of the institution.

During the ceremony, the professor disclosed that the institution plans to set up a modular refinery as well as procure a mining license.

This is according to the vice chancellor of the institution, professor Oluwatoyin Ogundipe during his investiture as the twelfth Vice-Chancellor of the University of Lagos.

Also speaking at the event is the Governor Of Lagos State, Mr Akinwunmi Ambode who delivered the convocation lecture with a focus on inclusion and the path to a new nation.

According to him, lack of trust remains a factor hampering the growth of the nation, however, the state government is already making efforts to set an example for the country to emulate.

The event is part of activities lined up for the 2017 convocation of the university.

UNILAG To Reopen Hostels For Examinations Amid Rising COVID-19 Cases