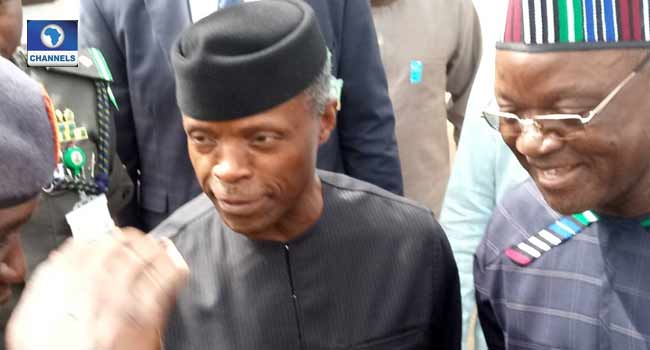 The Federal Government has approved a rehabilitation fund of N10bn for victims of killer herdsmen attacks in Benue, Nasarawa and Taraba states, as part of efforts to resettle thousands of Internally Displaced Persons (IDPs).

Vice President Yemi Osinbajo made this known on Tuesday during a visit to IDP camps in Makurdi, the Benue State capital.

A group of children at the Abagena camp, Benue, presented a song of welcome & appreciation to the VP and he afterwards moves close to them & gives them a New Song….telling the children & all at the camp that going forward they shall be winners. WINNER O O O Compelling&prophetic pic.twitter.com/y1ma0aewUN

He told over 34,000 IDPs who are taking refuge at the Abagana camp that the government is doing everything possible to ensure they are immediately resettled in their ancestral homes.

Several states have witnessed various attacks by the killer herdsmen since the beginning of the year with Benue state being one of the worst hit.

In April, the state government declared that the state was under a siege, following another attack on a church in which several persons were killed.

Subsequently, the governor, Samuel Ortom, dragged the leadership of the Miyetti Allah group before the State High Court, Markurdi, on the allegations of murder and widespread violence across 14 out of the 23 local councils of the state.

But the group has maintained that it has no involvement in the killings.

Several groups have, however, attributed the killings to the implementation of the anti-grazing law which bans open-grazing of cattle in the state.

But some others believe the anti-grazing law must not be compromised as it has nothing to do with the killings.

The Ekiti State Governor, Mr Ayodele Fayose had said that contrary to the belief in some quarters that Law was responsible for the killings, the Federal Government’s handling of security matters was to blame.