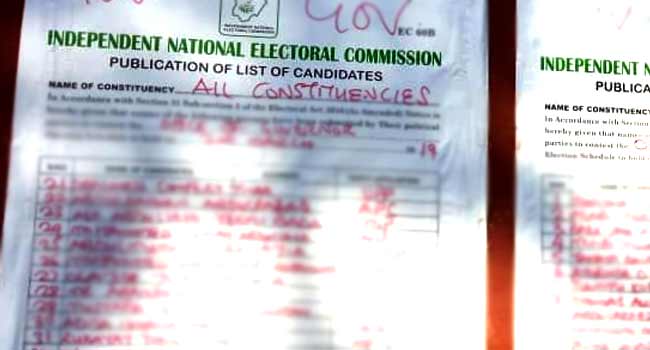 The Independent National Electoral Commission (INEC) has published the names of candidates vying for the governorship seat in Taraba State.

A visit to the INEC office in Jalingo, the state capital by Channels Television on Saturday revealed that the names of 28 candidates from various political parties were published by the electoral body.

Those on the list include the incumbent state governor, Darius Ishaku, of the Peoples Democratic Party (PDP) and a former deputy and acting governor, Sani Danladi, who is running on the platform of the All Progressives Congress (APC).

The list also features Adamu Danbako of the All Progressives Grand Alliance (APGA) and Danjuma Umaru – National Rescue Movement (NRM), among several others.

The electoral umpire also published the names of various candidates vying for the State House of Assembly under Jalingo II only.

Reasons were not given on why the names of other candidates were not published.

However, INEC spokesman in the state, Fabian Yame, told Channels Television in a telephone interview that they were working on publishing other lists of candidates.

Ishaku Calls For Immediate Cessation Of Hostilities In Taraba