Obasanjo Is Worse Than Abacha — Oshiomhole

The National Chairman of the All Progressives Congress (APC), Adams Oshiomhole has said that former President Olusegun Obasanjo was a worse dictator than General Sani Abacha.

Oshiomhole made this assertion in reaction to a recent statement by Obasanjo in which the Ex-President accused President Muhammadu Buhari of returning Nigeria to an era of impunity.

Obasanjo had in his statement said that President Buhari has returned the nation to the era when state institutions were used to fight the perceived enemies of the government.

Obasanjo alleged that the President was putting into practice, the lessons he allegedly learned from late General Sani Abacha. 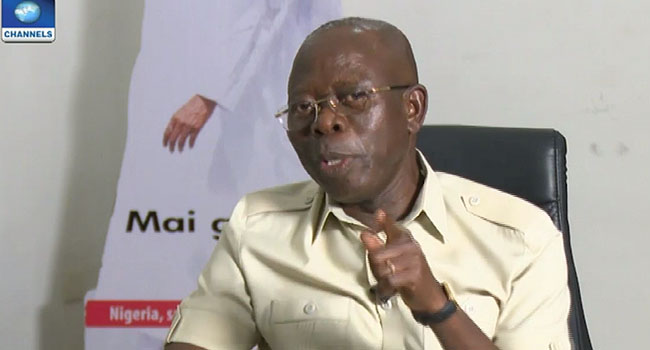 “Today, another Abacha Era is here. The security institutions are being misused to fight all critics and opponents of Buhari and to derail our fledgeling democracy,” he claimed.

Reacting to Obasanjo’s claims in an Exclusive Interview with Channels TV’s Seun Okinbaloyo, Oshiomhole disagreed that the country is drifting into a dictatorial state.

“Obasanjo can’t look me in the eyes and say those things, he is a worse dictator, he was worse than Abacha,” Oshiomhole said.

Speaking on the general state of the nation, Oshiomhole said Obasanjo ruled for eight years and could not fix Nigeria, and “we are saying Buhari should fix Nigeria in three and half years”.

Weighing in on the case of Justice Walter Onnoghen, Oshiomhole said it is morally improper for the Chief Justice of Nigeria to maintain multiple foreign accounts, and backed calls for the CJN’s resignation.

“You can’t fight corruption selectively, Onnoghen should spare the Judiciary the trauma,” the APC chairman stated.

He further argued that “Nigeria’s democracy cannot be stable if the rules are only made for the poor”.

Certificate Forgery: Why APC’s Suit Against Obaseki Was Dismissed – Court

NIN Registration: What FG Will Do If There Is A Second Lockdown – Pantami

Certificate Forgery: Why APC’s Suit Against Obaseki Was Dismissed – Court

Learn From Events Of US Election, PDP Tells APC