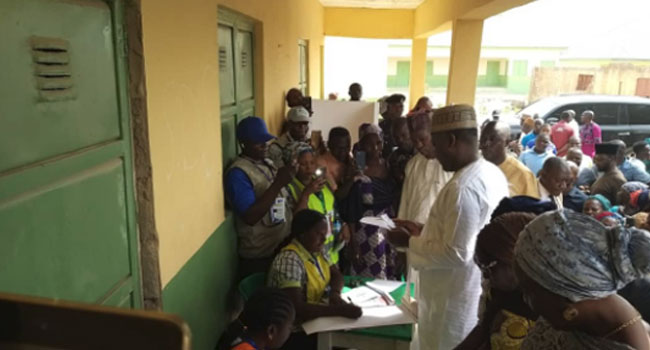 The Speaker of the House of Representatives, Yakubu Dogara, experienced a minor glitch as he tried to vote at his polling unit in Gwaranga primary school.

Dogara arrived the polling unit in his village Gwaranga, Bogoro Local Government Area of Bauchi State, alongside his wife.

At the point of accreditation, the card reader failed to authenticate his fingerprints.

INEC officials, however, found a way to fix the situation, allowing the lawmaker and his wife to vote.

After casting his vote, Dogara commended the voting process at his polling unit, describing it as a reflection of a truly democratic process.

He said, “But this is just one polling unit in perhaps hundreds of thousands across Nigeria.

So, if what is transpiring here is what is happening across the length and breadth of Nigeria, then I can say that this meets the standards of a democratic election.”

Earlier, the card reader had failed to authenticate his fingerprints but he was later allowed to cast his vote after his identity was verified using the voter register.

On what how he would assess the conduct of the polls, the Speaker said, “I think to some extent, INEC has shown that they intend to deliver a very credible, transparent and free and fair elections.

I think that intention is known but you know it doesn’t just take INEC. They would need the cooperation of the security agencies to be able to do that. My fear is that maybe that is where INEC may be betrayed.”

Similarly, three card readers broke down at the polling unit of Governor Nasir El-Rufai in Kaduna.

According to our reporter on the ground, the incident took place at Unit 024 Ungwar Sariki ward where the governor is expected to vote.

The three card readers developed a technical fault midway into accreditation and voting.  But INEC officials are making efforts to fix the situation.

I Rate The Eight National Assembly Low On Patriotism – Buhari

Eight Assembly The Most Performing In Nigeria’s History, Says Dogara

Saraki, Dogara And Their Ilks Hijacked The Budget This Last Four Years – Tinubu