Magu: EFCC Is Investigating Okorocha, Others

The Economic and Financial Crimes Commission (EFCC) has confirmed that it is investigating Governor Rochas Okorocha of Imo State and some other Nigerians.

Acting chairman of the anti-graft agency, Mr Ibrahim Magu, affirmed this during an exclusive interview with Channels Television in London.

Asked if an investigation is ongoing regarding the governor, he responded, “definitely”.

“Of course, we are doing a couple of checks and investigations here and there. We are investigating almost everybody,” the EFCC boss added.

He noted that the commission has to get to a certain level before it can disclose any information about an ongoing investigation. 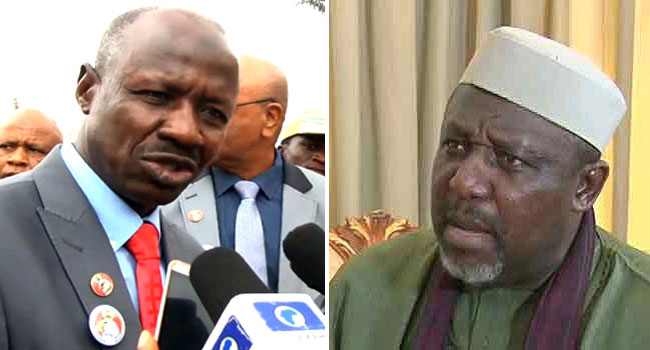 Mr Magu explained that this was necessary to prevent any action that can jeopardise or interfere with the process of the inquiry.

According to him, Governor Okorocha is one of the many people being investigated by the commission.

The EFCC boss said although he was aware of reports of the investigation on the social media, the details the anti-graft agency has was different from what was in the public space.

He, however, declined to disclose it.

On the EFCC’s probe of the Senate President, Dr Bukola Saraki, he said there was nothing personal.

Magu is in the United Kingdom to meet with investigators assisting the Nigerian government in solving cases of money laundering and financial crimes.

Recently, Governor Okorocha gave an indication that he was under the spotlight of the EFCC, saying he is the most investigated governor in the country.