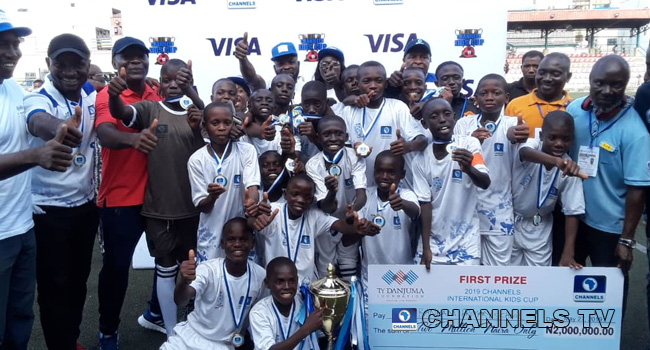 The kids from Rivers State beat their counterparts from Adetunji Primary School, Kwara State 1-0 to win the trophy.

The interesting final showdown took place on Monday at the Campos Square in Lagos Island.

Just about 15 minutes into the game, a player from Kwara was flagged over a hard tackle on an opponent, a few meters outside the box.

The referee then awarded a free kick against the Adetunji boys while a player from Rivers curled the ball straight into the net.

Team Kwara who were short of a player fought hard to get an equaliser before the half time whistle but to no avail.

After the restart, the Adetunji boys stepped up their game to put pressure on Banham but the Rivers boys showed their opponents that they were equally up to the task.

The Southerns maintained their lead until the end of regulation time to deny the Season 10 champions the opportunity to retain the trophy.

The final match of the tournament takes place yearly on May 27 to mark the Children’s Day.

This year’s edition is not different from the previous seasons as it featured many side attractions, one of which was a beautiful performance from Temilayo Abodunrin.

The nine-year-old saxophonist thrilled players and dignitaries at the Campos Square with love-preaching songs.