Almost one million people have been infected with COVID-19 in Africa, according to data from the Africa Centre Control (CDC).

Despite the rising infections from COVID-19,  more than half of those who contracted the virus – 602,578 – have recovered, the data further revealed.

However,  about 19,920 persons have died from complications from the pandemic.

Of the number of COVID-19 related deaths in Africa, the Africa CDC latest data shows that Southern Africa has the highest figure – 8, 642 – followed by the Northern – 6, 694.

Even though the central region of Africa with nine nations has one of the lowest infections level from the pandemic (48,897), less than a thousand persons – 941 – have died due to complications from the disease. 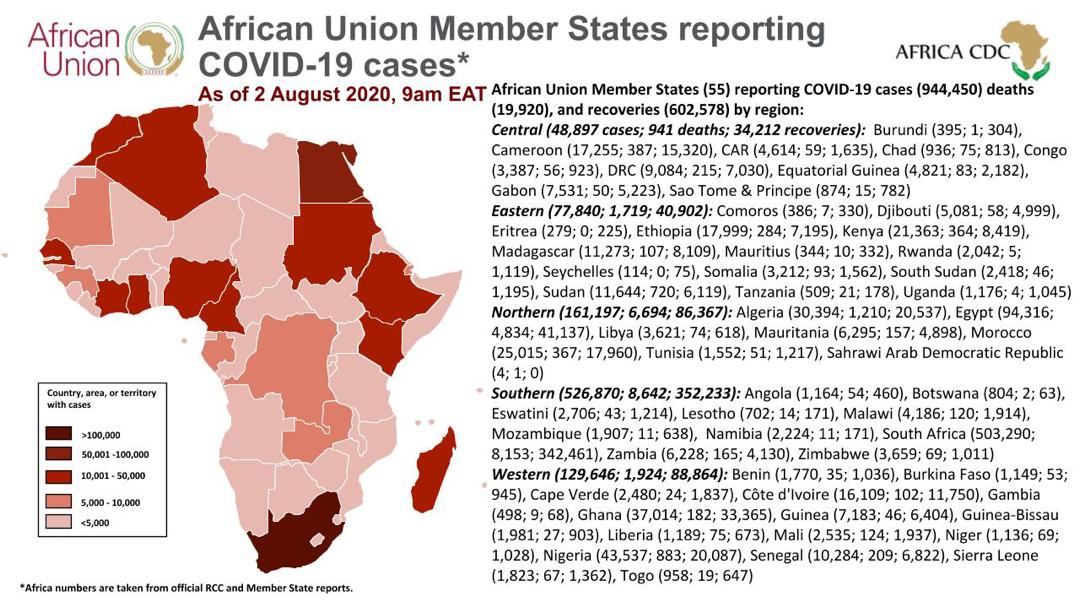 In West Africa, Nigeria has the lion share of COVID-19 infections  – 43,537 –  after 386 more cases were confirmed on Saturday evening.

The Nigeria Centre for Disease Control (NCDC) noted that four more persons have died from the virus as recovery numbers hit 20,087 and 883 deaths reported.

Since the outbreak of the disease in Africa on February 14th in Egypt, the World Health Organization (WHO) Africa, said more than 10, 000 health workers have been infected with the virus.

According to WHO Africa Region Director, Dr Matshidiso Moeti, the number of infected health workers in Africa is more than 5% of cases in 14 countries in sub-Saharan Africa.

“More than 10, 000 health workers in the 40 countries which have reported on such infections have been infected with COVID-19 so far, a sign of the challenges medical staff on the frontlines of the outbreak face,” the agency said in a post on its website.

South Africa, the worst-hit in Africa – 503, 290 cases which is more than half the continent’s infections – have reimposed a lockdown it lifted to strengthening an economy largely affected by the pandemic.

“As we head towards the peak of infections, it is vital that we do not burden our clinics and hospitals with alcohol-related injuries that could have been avoided,”  President Cyril Ramaphosa said in a televised address to the nation on July 12.

Just last week, the International Monetary Fund on Monday said it had approved $4.3 billion in aid to South Africa to help it fight the coronavirus pandemic.

“The IMF approved $4.3 billion in emergency financial assistance under the Rapid Financing Instrument (RFI) to support the authorities’ efforts in addressing the challenging health situation and severe economic impact of the COVID-19 shock,” the Washington-based crisis lender said in a statement.

‘Hotel Rwanda’ Hero Returned To Country Of Own Accord – Kagame