The Vice-Chancellor of the Rivers State University, Professor Blessing Didia, has been relieved of his appointment.

A statement posted on Governor Nyesom Wike’s twitter handle said the decision was with ‘immediate effect’.

Similar, the Deputy Vice-Chancellor (Administration) of the institution, Professor Magnus Oruwari, was relieved of his appointment.

He, thereafter, set up a committee to investigate the exercise and submit its report in two weeks.

Governor Wike has relieved the Vice Chancellor of the Rivers State University , Prof Blessing Chimezie Didia of his appointment with immediate effect.

The Statement added that Governor Wike has suspended the ongoing employment exercise at the university.

Furthermore, a committee has been set up to investigate the employment exercise and report to the Rivers State Governor in two weeks.

The Rivers State Police Command has confirmed the death of a Lecturer at the Department of Microbiology of the Rivers State University, who was attacked by suspected armed robbers in the early hours of yesterday, in his family house on Aka road, Rumulumeni, Port Harcourt, the State capital.

According to the Police Public Relations Officer DSP Nnamdi Omoni, the suspected robbers inflicted spinal cord injury on the victim who was eventually confirmed dead by the time he was taken to the hospital by a relation.

According to him, the State Commissioner of Police Usman Belle has ordered a full-scale investigation into the attack with a view to apprehending the Hoodlums. 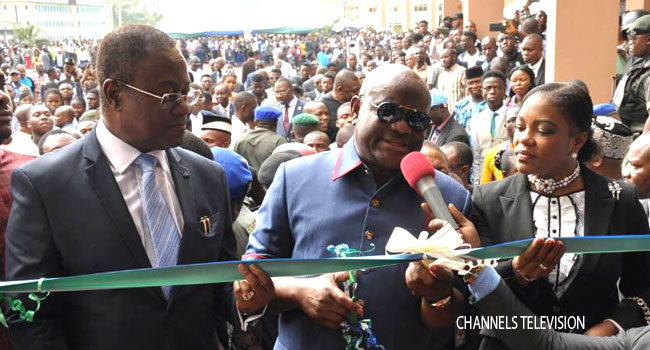 The projects inaugurated by the governor on Tuesday were ultra-modern buildings for the Faculty of Environmental Sciences and Faculty of Management Sciences at the university.

Governor Wike, who vowed not to play politics with education, said his administration would continue to sustain the development of critical infrastructure in state-owned tertiary institutions to improve the quality of education in the state.