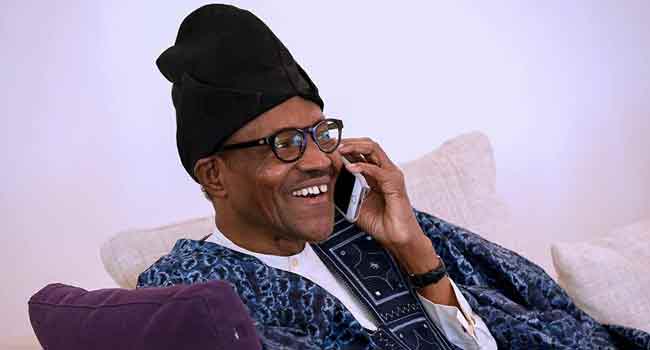 President Muhammadu Buhari has commended the current level of relationship between Nigeria and the United States.

The Senior Special Assistant to the President on Media and Publicity, Mr Garba Shehu, revealed this in a statement on Friday in Abuja.

According to him, President Buhari gave the commendation when he received a telephone call from the U.S. Secretary of State, Michael Pompeo, on Thursday in.

The President, who used the opportunity to congratulate the new Secretary of State on his appointment, recalled his previous meeting with Mr Pompeo when he was the Director of the Central Intelligence Agency (CIA).

He thanked the Secretary of State for the enormous support the U.S. has extended to Nigeria, especially in the areas of security and intelligence gathering.

President Buhari also requested Pompeo to extend his appreciation to U.S. President Donald Trump for the warm reception received in the course of his recent visit to the White House.

The Secretary of State, on his part, assured the President that with him in the Department of State, the relations between both countries would get even better.

He also reiterated the desire of the U.S. to continue to pursue, side by side with Nigeria, matters of common interest on the African continent, including the fight against terrorism and corruption, as well as trade and development.

The European Union has announced plans to expand its partnership with Nigeria beyond the traditional field of aids and donations to mutually beneficial cooperation.

The head of the European Union delegation to Nigeria and ECOWAS Ambassador, Michel Arrion, told the Minister of Science and Technology, Ogbonnaya Onu, that the EU is looking at new areas and sectors that will ensure relevant contribution to the partnership between the regional block and Nigeria.

The new areas include energy, transport, science and technology and climate change.

The Minister of Science and Technology welcomed the expanded ties and requested that the extended cooperation include training and research, to help Nigeria move away from a resource based and commodities dependent economy.

The Minister also hosted the Portuguese Secretary of State for Foreign Affairs, Teresa Ribeiro and her delegation whose interest also lies within the expansion of economic and cultural ties with Nigeria, as well as on a convention that will eliminate double taxation in the area of business and investment between both countries.

The visit to the Minster was the second time Ambassador Arrion would officially visit the ministry and the Minister considered it a welcome development especially as Nigeria diversifies its economy. 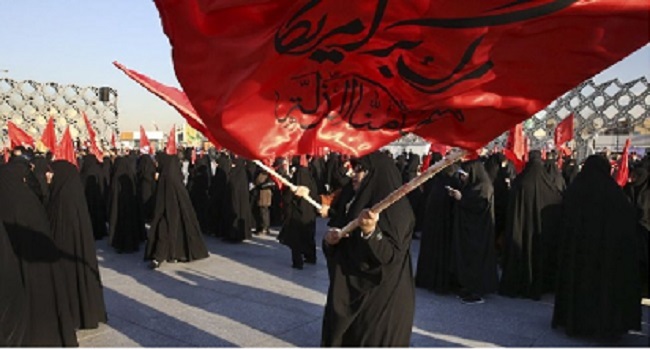 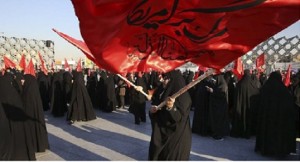 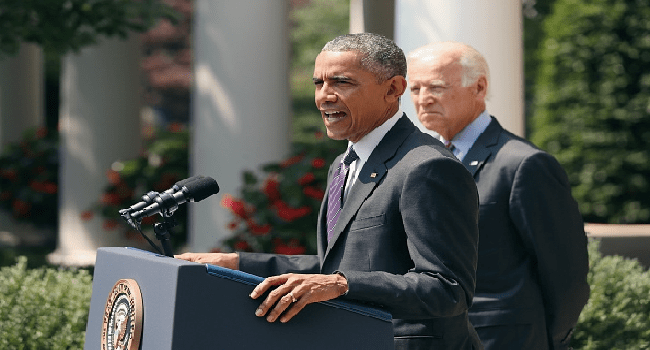 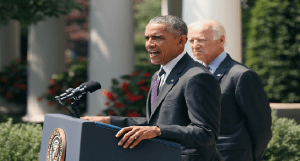 The United States and Cuba have quietly ushered in a new era of post-Cold War relations, formally restoring diplomatic relations after an agreement struck last year putting aside decades of hostility.

The diplomatic missions of each country became full embassies on Monday, after midnight local time.

Cuba Foreign Minister, Bruno Rodriguez, would preside around 10:30 a.m. over the raising of the Cuban flag for the first time in 54 years over a mansion that would serve as Havana’s embassy in Washington.

The hugely symbolic event would be followed by a meeting at the State Department between Secretary of State, John Kerry and Rodriguez, the first Cuban foreign minister on an official visit to Washington since the 1959 Cuban Revolution.

While the Cubans hold their ceremony, the U.S. Embassy in Havana would also reopen.

But no American flag would fly there until a visit by Kerry, expected next month.

“We wanted the secretary to be there to oversee these important events,” a State Department official said.

Starting Monday, the Cuban government would pull back some of the tight cordon of security that had surrounded America’s diplomatic mission in Havana and no longer record the names of Cubans entering the building, U.S. officials said.

The heads of the respective Interest Sections in Cuban and American would become charges d’affaires until ambassadors are named.

More than 500 people would attend the Cubans’ festivities in Washington, including members of Congress. No invitations went out to hardline anti-Castro lawmakers. The U.S. delegation would be headed by Assistant Secretary of State, Roberta Jacobson.

Kerry and Rodriguez last met in April at the Summit of the Americas in Panama, where Obama and Castro also held talks. Aides see the outreach to Cuba as a boost to Obama’s legacy.

The re-establishment of embassies, agreed to on July 1, opened a new chapter of engagement by easing government contacts heavily constrained since the United States broke off relations in 1961.

The normalisation process had been slowed by lingering disputes, including over human rights as well as Havana’s desire to keep a tight rein on its society and state-run economy. 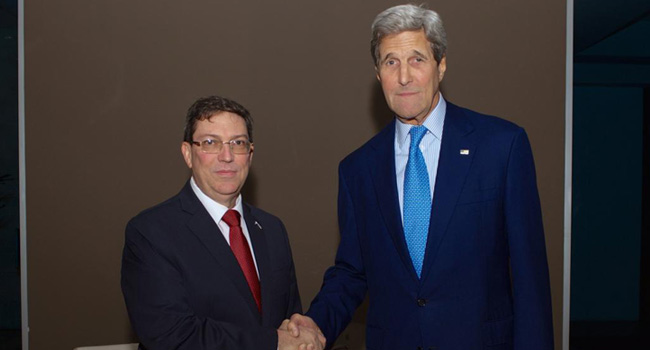 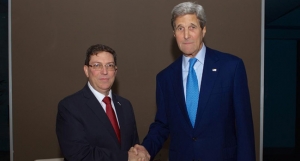 The U.S. and Cuban foreign ministers sat down for talks on Thursday night in the highest-level meeting between the two sides since the early days of the Cuban revolution more than half a century ago.

The two men talked for at least two hours, sitting across from each other in a restaurant-bar in the hotel fronted by large glass windows. The U.S. government said the meeting went well.

“Secretary Kerry and Cuban Foreign Minister Rodriguez had a lengthy and very constructive discussion this evening. The two agreed they made progress and that we would continue to work to resolve outstanding issues,” a senior State Department official said.

During the talk, Kerry at times gesticulated to Rodriguez with his hands as security officials stood guard outside.

The encounter took place on the eve of the Summit of the Americas in Panama, where Obama and Cuban President, Raul Castro, will cross paths along with other leaders in the region. The two men are expected to at least shake hands.

Obama appears to be close to removing Cuba from the list of countries that the U.S. government says sponsor terrorism.

The State Department has now recommended that Cuba be taken off the list, a U.S. Senate Foreign Relations Committee aide said earlier on Thursday.

Obama is expected to agree, although it is not clear whether he will announce his decision during the summit.

Cuba’s inclusion on the terror list has been a major stumbling block to restoring relations. Reversing it would help ease some financial sanctions against the island and make it easier for U.S. companies to do business there.

A U.S. official said Kerry and Rodriguez sought to smooth the way for Cuba’s removal from the list. The United States has pushed for Cuban assurances of no future support for terrorism, and Cuba has responded by making the same demand of Washington.

Obama’s decision to move toward restoring full diplomatic ties is a sea change in relations since the Cuban revolution, when U.S.-backed dictator Fulgencio Batista fled the island on Jan. 1, 1959, as Fidel Castro and his revolutionaries seized control.

John Foster Dulles and Gonzalo Guell were the last U.S. and Cuban foreign ministers to hold a formal meeting, in Washington on Sept. 22, 1958, said a U.S. official who spoke on condition of anonymity.

The highest-level meeting after the revolution took place in April 1959, between then-Vice President Richard Nixon and Fidel Castro, who was Cuba’s prime minister at the time.

It also imposed a tough trade embargo that Cuba blames for many of its economic problems.

Obama has already relaxed some trade and travel restrictions but only the Republican-controlled Congress can overturn the embargo, and the U.S. president faces fierce opposition from some lawmakers. 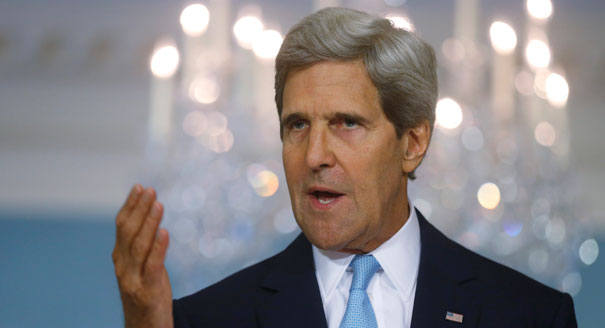 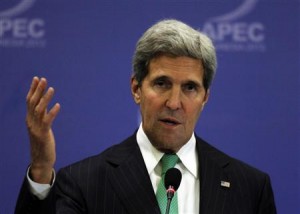 The U.S. Secretary of State, John Kerry, says that despite help on the ground from Britain, France and Israel, the United States is alone in helping Nigeria locate more than 200 school girls kidnapped by the Boko Haram Islamists.

Mr. Kerry was speaking during a dinner at the State Department on the occasion of the 90th anniversary of the US Diplomats Corps.

With 80 military personnel sent to neighboring Chad for intelligence, surveillance and reconnaissance missions, the United States is the biggest foreign participant in the effort against the militant group, Boko Haram.