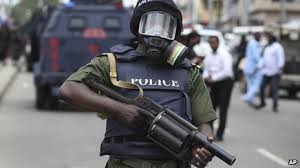 An anti-bomb squad of the Nigeria Police Force has defused a bomb planted in a bank in Osogbo, the Osun State capital.

The bomb, believed to be an improvised Explosive Device (IED) and wrapped in a black polythene bag, was dropped in one of the new generation banks along Station Road in Osogbo.

Although Channels Television was not able to speak to any eye witness, the spokesperson for the Osun State Police Command, Folasade Odoro, said the police were alerted at about 10.30am, local time, by the bank authorities on the suspicious package.

Odoro said that the anti-Bomb Squad of the command swiftly moved to the scene and defused the item, which according to her, had a GSM phone tied to it.

The police command said that investigations into the foiled bomb attack had started and urged people to go about their normal duties.

Activities returned to normal after several security personnel were deployed around the bank to assure safety.