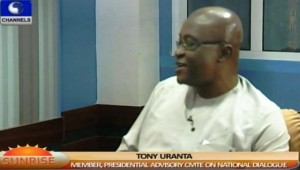 A member of the Presidential Advisory Committee on National Dialogue, Tony Uranta has asked Nigerians to give the upcoming National Conference a chance to start before criticizing its chances of serving the purpose for which it was convened.

He was speaking on Channels Television weekend programme, Sunrise, where he stated that the composition of the delegates to the conference had only 72 nominated by the Federal Government, which is less than 15% of the total number of the delegates and nullifies the chances of manipulation by the Government.

The programme focussed on the activities preceding the conference and the issue of older people making up majority of the delegates came to the fore, as many Nigerians have pointed out. A member of the Editorial Board of National Newspaper, Sanya Oni, agreed with the sentiments but believed that the issue showed the level of capacity of the Nigerian youth.

He added that the youths were doing well in business and in the corporate world on their own “so why is it in politics that they want to be helped?” He said that he didn’t believe things like leadership would fall on the laps of the youths as it was their responsibility to seize the initiative.

Uranta added that the Nigerian youth today was more knowledgeable especially in the digital age, and they have the responsibility to make themselves relevant in the politics of Nigeria.

Legal Practitioner, Malachy Ugwummadu also said that the youths lacked the kinds of robust activities that would position them for leadership. He refused to accept the claim that the present political configuration of the country shuts out the youth.

He cited the National Association of Nigerian Students as an example. He spoke about times in the country when serious national issues were mainly driven by the Students’ body; a situation which he said had degenerated into quest for self-gratification from the current young people.

The Northern elders have expressed negatives views on the conference, claiming that the delegates were not representing the North, and Sanya feels that this was an unfortunate situation.

He preached that Nigerians really need to understand that there was dire need for the country to talk. He berated what he termed the off-the-curve discussions, the manner in which they dismissed the National Conference, and the provocative statements made during the Northern Elders’ Forum.

He singled out the claims of ownership of the Nigerian oil by the North as highly provocative.

Mr. Uranta, shared the view that the declaration of the Northern Elders’ Forum was a reaction to being left out of the main activities of the National Conference. He argued that they are just a faction of elders as the main elders of the North had warmly embraced the idea and also have delegates attending. 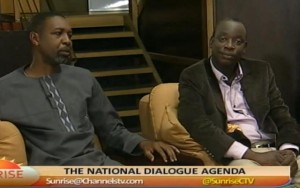 Mr. Ugwummad, however, believed that the Northern Elders’ reservations should not be totally condemned as many Nigerians including himself were also hard critics of the whole idea.

He asserted that the issues have moved on from agreeing with the idea into the issues of implementation of the resolutions, the large budgets being earmarked for the talks, and the controversies surrounding the subjection of the issues being discussed at the conference to the National Assembly.

Mr Sanya also added that there were too many problems in the country and accepting that reality was the best way forward for Nigerians. He asserted that the need to decentralise power and empower traditional authority were among the issues that needed to be addressed.

While explaining the importance restructuring the leadership of the country, Mr. Uranta said “You cannot but have federalism such that the different federating units will have coordinate powers.”

He said that the claims by some Nigerians that the groundnut pyramids in the North funded Nigeria would be among matters to sort out, as he argued that in the early 1960s and according to the constitution, each region in the country funded itself and had its own economy, its own flag, anthem, and ran its own affairs.

He stated that discussing such structural issues would determine how well the other matters like fiscal federalism and national security would be treated. He added, “Let that be decided by the people.”

Why Should Anybody Get Paid?

Sanya had to contend with the question asked via social media by a Channels Television viewer. Although he admitted that there was need to cater to the needs of the delegates as they were not expected to be exposed to risks in Abuja, but added that the figures being mentioned as the delegates’ allowances and the total budget of the project were indeed outrageous.

Mr. Uranta, however, shared the view that the budget could be justifiable.

He said “I stay in the Hilton and a room can go for like 58,000 Naira” and Nigerians have to think of all these things as many of the delegates are also retired and old; while some of them would have to come with their wives for the 3 months exercise. He added, “We cannot deny them their conjugal rights”

Mr Ugwummadu added that he hoped that the conference would not ending looking like nothing had been done.

National Security: Senate Asks IGP To Appear Before It On Tuesday