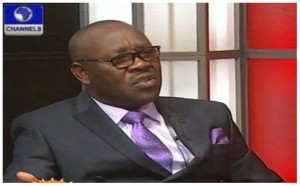 A legal practitioner, George Eke, on Wednesday advocated that the controversial ex-governor’s pension law be scrapped and a “Salary For Life” approach be adopted to allow those who have served to have benefits after their time in office.

“Let them have, at least for serving, life pension” he said, while on Sunrise Daily, describing the extra perks including cooks, security aides, houses as “looting and an abuse of the office.”

Although he commended Governor of Akwa Ibom State, Godswill Akpbabio for bringing the discussion to the front burner, Eke insisted that the law was an attempt by governor’s leaving office to get enough money to keep them secured after their tenures.

He stressed that the bill has been passed in almost all the States of the federation and wondered where the NGO’s and civil society groups were when the law was initially passed.

According to the lawyer, the perks for those who have served in office are too much, which is why many become desperate to be in power.

“Why must the governor be in the sky after serving?” he asked, noting that no destitute contests for the position of governor and so the law mandating that a 5-bedroom house for governor “is rubbish”.

On the health pension, Eke said the governors should make the health system work and then they can be given free medical attention after office.

“Let them have at least for serving, life pension” he said, describing the extra perks of cooks, security aides, houses in Abuja as “looting and an abuse of the office.”