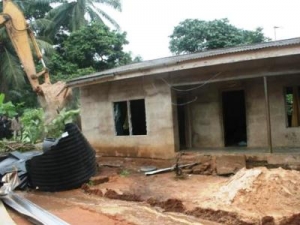 Two active kidnap dens have been demolished by the Police in Anambra State at Odida-Ogidi and Ire-Ojoto in Idemili North and South Local Government areas of the state.

Leading the demolition squad, the State Commissioner of Police, Usman Gwary, said that the kidnap den in Ogidi, a rented bungalow, have fetched the suspected kidnappers over 100million Naira and has housed over twelve victims.

The den in Ire Ojoto, however, has been used to keep over 30 victims and during a search in the house on arrival, two bags of Indian hemp were recovered.

The police, alongside two kidnap suspects took the press to the two active kidnap hideouts.

The Odida-Ogidi kidnap den was indeed a haven as the bushy and isolated location made it easy for the kidnappers’ sinister operation. Various items including food, furniture and electrical appliances were recovered from the rented three bedroom bungalow depicting constant habitation of the house.

The Commissioner of Police, Usman Gwary, stated that according to the law of the state, the Governor has given his express approval for the demolition of the building while the right of occupancy by the owner revoked.

At Ire-Ojoto was a building which had been built since October 1963 by late Chief Edwin Okigbo. It was pulled down as it was proved beyond doubt that the building in the last few years had been turned into a very active kidnap den.

While the villagers watched from a distant, a family member and chairman of the community vigilante group, Mr. Paul Okigbo, expressed surprise at the development but still maintained that the law must take its full course if the story told about the house being a kidnap den was true.

In a similar development at the headquarters of the Special Anti-Robbery Squad, SARS, in Awkuzu, 17 suspects were paraded amongst whom were 5 female suspects who were arrested for number plate forgery as well as forgery of all kinds of motorcycle particulars and documents.

The male suspects were arrested for mostly armed robbery in which a 3-man gang amongst them was notorious for diverting goods from unsuspecting heavy duty truck drivers on the major highways. All the arrests were made in one week.

The State Police Public Relations Officer, Emeka Chukwuemeka, showed the State Commissioner of Police, who arrived at the SARS office, some of the goods recovered from the suspects. He also gave details of the arrest.

The brigade’s attack on criminals, according to the State Commissioner of Police, would continue until the state is rid of kidnapping, armed robbery and all forms of criminal activities.