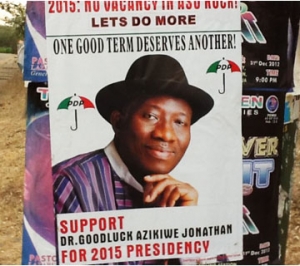 The Presidency says it is not behind the posters and television jingles that have been encouraging President Goodluck Jonathan to contest the 2015 presidential election.

The Special Adviser to the President on Political Affairs, Professor Rufai Alkali, speaking in Abuja, said that individuals and groups who want the President to continue in office, were responsible for the media messages.

He applauded the President for having kept his promise to make votes count in Nigeria, as observed in the just concluded Osun State governorship election.

The presidential aide, however, also encouraged Nigerians to be more vigilant as the 2015 general elections get closer.

They have, through the posters and and jingles in the electronic media, suggested that the second term in office would enable him consolidate on his successes and complete key transformation projects he already started.