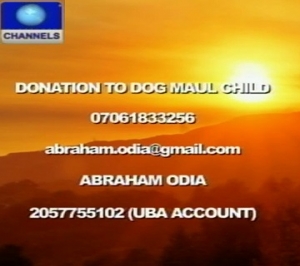 A parent, Mr Abraham Odia, has cried out to Nigerians to help donate funds to send his 4 year old son abroad for treatment for wounds suffered after an attack by two dogs on September 25.

The four-year old boy had been attacked by two dogs belonging to the landlord of the apartment where he and his family reside.  Although policemen had been contacted to rescue the boy while the attack was on, no one could save the situation.

He however thanked the “Lagos State government for taking over responsibilities of the wounded child and God almighty that my son is still alive today”.

He further noted that the injury sustained from the attack was too grave that doctors had to “summon courage to take the boy to the Burns and Plastic Ward of the Lagos State University Teaching Hospital (LASUTH), Ikeja, where he is taking his treatment”, he said.

He said for now he doesn’t intend to take legal action over the issue, maintaining that “all I am just after at this point in time is for my son to be well and God is working” he said.

He reiterated the pain his son is going through after doctors confirmed that there is no flesh on the head to enable them carry out an operation.

“I will be delighted if they can help fly my son abroad for skin grafting, because as a father I am feeling the pain the boy is passing through and the time he is going to spend at the hospital”, adding that “I cant stand it when I look at opening on his head anytime they open it.

“Every time they open it I just weep and cry” he said.

He called on those willing to help to reach him on the following media;