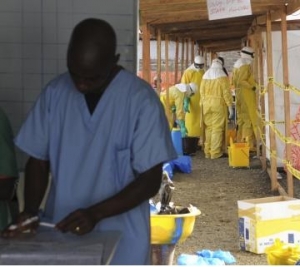 The World Health Organisation (WHO) on Monday declared Nigeria free of the deadly Ebola Virus. Nigeria has not recorded a new case of Ebola for 42 days or two incubation period of 21 days.


WHO representative, Rui Gama Vaz, who said it was a “spectacular success story”, added that “Nigeria is now free of Ebola.

“This is a spectacular success story. It shows that Ebola can be contained but we must be clear that we have only won a battle, the war will only end when West Africa is also declared free of Ebola”, he said.


The disease gained entry into the country in July when Liberian, Patrick Sawyer, came in on diplomatic assignment.

The diplomat had fallen ill and was admitted at the First Consultants Hospital, Obalende, in Lagos.

Nigeria had 20 cases in total, of which eight died.


The outbreak has killed more than 4,500 people in West Africa, mostly in Liberia, Guinea, and Sierra Leone.

An estimated 70% of those infected have died in those countries.

The WHO officially declared Senegal Ebola-free on Friday. Below is the full statement by the World Health Organisation (WHO).

‎Today 20th October, 42 days(twice the incubation period) after the last confirmed case of Ebola Virus Disease was discharged from the isolation ward having tested negative for Ebola virus, the chains of transmission have been broken.

WHO officially declares that Nigeria is now free of Ebola virus transmission. The virus is gone for now. The outbreak in Nigeria has been contained. But we must be clear that we only won a battle. The war will only end when West Africa is also declared free of Ebola.

While the outbreak is now officially over, Nigeria’s geographical position and extensive borders makes the country vulnerable to additional imported cases of Ebola Virus Disease. It is therefore critical to continue vigilance for any suspected cases by strict compliance with WHO EVD preparedness guidelines. Therefore there is need to continue to work together with states to ensure adequate preparedness to rapidly respond, in case of any potential re-importation.