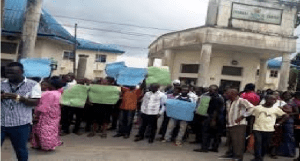 Labour leaders in Osun State, South-west Nigeria, have resolved to continue with the on-going industrial action until the state government fulfills all the points raised in the agreement reached in the Memorandum of Understanding (MOU), signed with the workers on payment of the two months salaries.

Speaking on the position of the union after hours of meeting, the state Chairman of the Joint Negotiating Council (JNC), Bayo Adejumo, maintained that workers will not return to work until the full payment of January and February salary is implemented.

The labour leaders said they have reached a decision on the way forward for the Osun workforce and have also taken a position on what they termed as “breach of agreement” on the state governments part having signed a Memorandum of Understanding with government to offset two out of the seven months unpaid salaries.

It is said that the decision on who to read the resolution of the labour leaders became a difficulty before the Chairman of the JNC read it out, and was silent on whether the strike continues or is suspended.

Earlier this month, there was an agreement between the leadership of the Nigerian Labour Congress (NLC) and the Osun State Government as the 6-weeks strike embarked upon had been suspended.

The Chairman of the Union, Jacob Adekomi, said that the Union agreed to suspend the strike as government has fulfilled its part by paying the two months arrears.