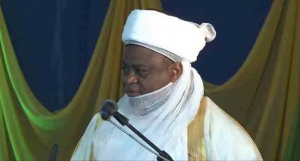 The President General of the Jama’atu Nasril Islam (JNI) and Sultan of Sokoto, Alhaji Sa’ad Abubakar, has called on the Saudi Arabian Government to investigate the cause of the stampede in which 768 pilgrims died in Mina, Saudi Arabia, during the stoning of the devil.

In a statement issued on his behalf by Secretary-General of the JNI, Dr. Khalid Abubakar-Aliyu, in Kaduna, the Sultan descibed the stampede as ‘one tragedy too many’.

Alhaji Abubakar condoled with the families of the victims of the tragedy, also calling on Muslims never to be deterred by the tragedy, but remain steadfast, despite the challenges confronting them.

While commending the Saudi authorities for the steps they have taken so far to make the Hajj operation a success, the statement maintains that an investigation into the stampede has become necessary to guard against a recurrence.

The incident occurred on Thursday, September 24 on Street 204 of the camp city at Mina, a few kilometers east of Mecca, where pilgrims stay for several days during the climax of the Hajj.

Authorities in Saudi Arabia have described the stampede as one that was beyond human control.