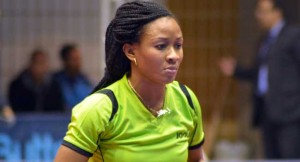 Nigeria’s experienced female table tennis player, Olufunke Oshonaike, has decried the lack of support the sport is suffering in the country.

Despite achieving recognizable success in the last three years, Oshonaike said that she cannot understand why the National Sports Commission is not willing to assist the federation to consolidate on their efforts.

The Germany-based player told Channels Sports that the negligence from the Sports commission is discouraging.

“I couldn’t make it to the ITTF Africa Top 16 in Sudan because of funding. No one has called me to find out why I did not participate and that’s because they don’t care. I had to pay for my trip to Yaounde for last year’s edition and till today, I’ve not received any refund. It’s just discouraging,” she lamented.

Oshonaike, who has qualified for the Olympics in Rio by reaching the semi-final phase at the African Games in Congo said that it is difficult for players to always pay for trips to represent Nigeria at international competitions.

She added that at the moment she did not know the plans of the Commission as regards the Olympics.

“Let’s not even talk about the Olympic Games yet, that one is in August. Let us talk about the World team Championships in Malaysia that comes up next month. What are the plans for team Nigeria? We don’t even know the players that will feature, no one has been contacted as regards preparations or even travel itinerary.

“For a competition as important as the world championship, that’s not the sort of approach we should give it.”

Oshonaike also spoke about Aruna Quadri’s victory in Sudan, the pride he brings to Nigeria and her wishes for Quadri to get corporate sponsorship that will help him take his game to the next level.

“I’m so excited about Quadri’s victory over Omar Assar. I have been celebrating and posting comments on social media. Quadri is a fighter and hard-worker who will go places in the future but without good support, it will be hard.

“He keeps winning for Nigeria and no one has recognized him and that’s not encouraging. He won the trophy in Sudan and it was announced Aruna Quadri of Nigeria, so that means his country must also be there for him. I want to wish him all the best in his career.”

Segun Toriola and Edem Offiong will begin their quest towards securing tickets to the Olympics on Tuesday in Khartoum, Sudan.

Toriola, who has featured at the Games six times, will make history if he can make a seventh appearance at the tournament.

Japan To Evacuate Citizens From Wuhan Over Coronavirus