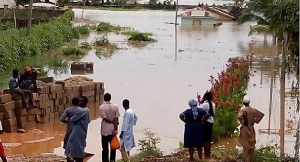 No fewer than 300 houses in some parts of Kaduna State, North-west Nigeria, have been submerged by flood, as a result of a heavy rainfall.

Following the Incident, more than 10, 000 people have been forced out of their homes.

The incident which started on Friday morning, after long hours of heavy downpour, lasted till later in the evening.

In July, the National Emergency Management Agency (NEMA), issued an alert that eight Local Government Areas in the state were likely to experience flooding, and therefore warned residents of the affected areas to vacate to safer places.

Ever since the flood incident in 2012, that killed about seven people, destroyed several houses and farmlands in Kaduna, the State Emergency Management Agency has set up an early warning system to monitor the situation.

The agency said Friday’s flooding incident was as a result of drainages being blocked with refuse, and people building structures along water channels.

Reports say that most of the affected houses are those located near the bank of River Kaduna without proper drainage systems.

Flooding has become an annual occurrence in most parts of Kaduna State, as well as some other states around Nigeria, during the rainy season.

In spite of several warnings by the NEMA to vacate the areas, some residents had however, refused to comply with the directive, due to claims such as lack of adequate funds to secure new homes.

While Others insisted that their houses were not built on water ways, and rather requested that the Government should construct drainages along the water fronts, in order to avert any further disaster.

Due to the incident, many roads have been blocked, thereby making it difficult for residents to evacuate their properties, most of which have been submerged by flood.

Japan Begins Charging For Use Of Plastic Bags