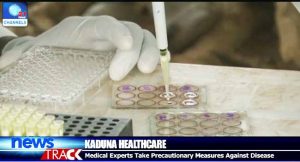 A vaccination campaign has begun in Kaduna state to stop the further spread of river blindness across some communities.

Men, women and children trooped out to know their health status as the medical experts came to conduct the tests.

New cases of the disease were recently recorded in Iri, Ugwan Fada, Ungwan Makama, Robo and Ugwan Aku Communities and the Director, Onchocerciasis Research, NITR, Augustine Igwe, said that the tests were being carried out to know if there was still transmission of the disease.


The level of casualties recorded in the Kaduna state has been described as alarming but a resident revealed that the problem has been largely compounded by the absence of basic social amenities such as clean water.

River blindness is a tropical eye and skin disease transmitted by black flies which breed in fast flowing rivers.

One of the medical personnel at the vaccination campaign also explained that several clinical manifestations may occur such as yellow and dark patches on the leg, visual impairment, or total blindness at the worst.

A 2015 report from the World Health Organization (W.H.O) showed the intensity of efforts that have been put in place to combat the disease.

It also showed that more than 99% of the infected people live in 31 African countries. And although the disease had been well managed to a large extent, some communities still battle with it.

Kaduna To Reopen Schools For SS3 Students On August 10