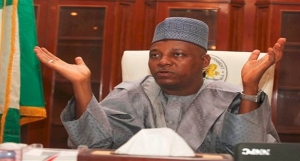 The Borno State Commissioner for ‎Environment, Alhaji Waziri Imam, has died at the age of 54.

This development has made Governor Kashim Shettima to end his temporary relocation to Bama and tour of destroyed communities after visiting Chibok, Gwoza, Askira-Uba and Damboa local government areas, all in southern parts of Borno State.

The death of the Commissioner was confirmed in a statement by the Secretary to Borno State Government, Usman Jidda Shuwa.

The Commissioner, who is a younger brother to an APC national chieftain, Alhaji Kashim Imam, died after a brief illness in Maiduguri on Wednesday morning.

He is survived by a wife and six children.

The Governor left Bama on Tuesday after nearly one wee‎k of Relocation to mobilize major reconstruction works.

Shettima visited Pulka, a populated village in Gwoza Local Government Area and also assessed destruction and ongoing reconstruction works in Gwoza town during which he interacted with thousands of residents that have since returned to their communities.

The Governor proceeded to Lassa for assessment before passing the night in Uba, another community in Askira-Uba Local Government Area, which was liberated from Boko Haram.

The Governor was also in Askira town, headquarters of Askira-Uba Local Government Area and met with the Emir.

The Governor left for Chibok to assess reconstruction works and interacted with some stakeholders before cutting his trip back to Maiduguri following the demise of his cabinet member.

The late commissioner was buried on Wednesday evening in Maiduguri in accordance to Islamic rites.