We Need More Than PDP And APC To Move Nigeria Forward, Fayose Says 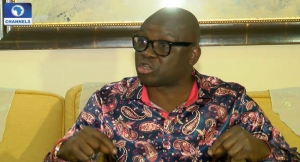 At a time that Nigeria is battling to wriggle out of economic recession, the Governor of Ekiti State, Mr Ayodele Fayose, is saying the nation needs more than the All Progressives Congress and the Peoples Democratic Party, his political party, to move forward.‎

Mr Fayose made the assertion on Wednesday while addressing reporters in Akure, the capital of Ondo State, shortly after featuring in a personality interview programme of a state-owned radio station, Orange FM.

Governor Fayose gave his opinion on some state and national issues.

“Every political party has got its own problems. Let me tell you, as the events unfold there will be a way out of all these lock-jams.

“Nigerians need more than PDP [the Peoples Democratic Party] and APC [All Progressives Party] to move this country forward. APC has failed Nigerians and I’m glad that they came out to take responsibility for this failure.

In his words: “If you take a look at the events ‎in our country today, nothing works; no roads, no water, no light; the aviation sector is in trouble.

“This is not personal, they might not like my face but they need to hear this that they are not impressing Nigerians”.

Asked if a new party would emerge soon, he replied: “Well, I’m not God but nothing is impossible”.

Mr Fayose’s statement is coming at a time the PDP is also striving to address grievances that had led to division in the party that now has two factions.

The trouble deepened when the party’s chairman, Senator Ali Modu Sherrif was removed at a controversial convention held in Port Harcourt, the capital of Rivers State in May.

After his removal, some top party members set up a caretaker committee to handle the affairs of the party. The committee is headed by Senator Ahmed Makarfi.

Court cases followed the decision, with Senator Sheriff getting court a order that upheld his chairmanship position.

The order faction has also obtained orders from court that upheld the removal of the chairman of the party.

Crisis is also showing up in the APC, with the national leader of the party, Senator Bola Tinubu and the Chairman of the party, Mr John Oyegun, having disagreements that had triggered a statement from Senator Tinubu, demanding Mr Oyegun resignation as the chairman.