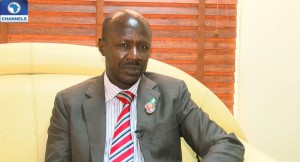 The Nigerian Senate has refused to grant confirmation to the nomination of Ibrahim Magu as Chairman of the Economic and Financial Crimes Commission (EFCC).

Explaining the reason behind the decision, the Senate said that security report available to it showed that Mr Magu is not fit to be chairman of the body.

In this regard, the lawmakers have sent back his nomination letter to President Muhammadu Buhari.

Addressing journalists at the National Assembly, Senate Spokesman, Aliyu Abdullahi said that based on security reports, the Senate cannot proceed to confirm the acting EFCC Chairman.

With the Senate throwing back the nomination of the Mr Magu back to President Buhari, it is not clear at this point what the President’s action would be.

Nevertheless, the Senate President went ahead to welcome and swear in three lawmakers from Rivers state; Senators Magnus Abe, George Sekibo and Osinakachukwu Ideozu who emerged winners in a highly contested and violent senatorial election.

In July 2016, the Senate had received the letter from the Presidency for the confirmation of the appointment of Magu.

The letter also sought the confirmation of Mr Ndasule Moses, Lawan Mamman, Galadanci Imam, and Adeleke Rafiu as members of the commission.

He is an Assistant Commissioner of Police and was also one of the deputies of the former EFCC boss.

I Have Never Bought Any Property From EFCC, Says Falana

Nobody Is Safe Until Everyone Is Vaccinated – Boss Mustapha

You Have Few Weeks To Secure The Country, Buhari Tells New Service Chiefs