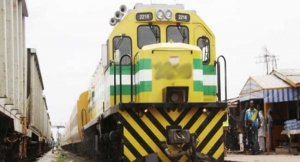 A passenger train, carrying soldiers and civilians traveling from Kano to Lagos state is said to have collided with a trailer at a railway crossing in Kaduna state.

Although the train was said to have cut the trailer into two, fortunately, no casualty was recorded.

The Kaduna state FRSC sector Commander, Mr Francis Udoma, said the accident occurred when the driver of the trailer insisted on crossing the rail line even when the train was blaring its horn.

Furthermore, he disclosed that the accident which occurred at Kawo area in the state capital, caused a heavy traffic jam which lasted for over six hours.

Motorists coming from Kano and other northern states, as well as those coming from the southern and the eastern parts of the country were all stranded at the railway crossing, Udoma said.

“We deployed our men, including myself, when we received the call, and arrived there to manage the traffic jam for hours.

“We were there until 9 a.m. before we were able to open the road for motorists to pass through.”

Blaming the trailer driver for the avoidable incident, he said: “It could be that the driver had problem hearing, because trains normally will blare their horns, but this driver, even with the horn decided to cross”.