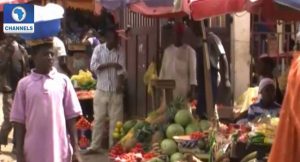 The Edo state government has advised traders who trade on the walkway to relocate into the market as government would shortly commence the enforcement of the law against street trading.

The Edo State Deputy Governor, Philip Shaibu, who served the notice in an interview with Channels Television said that the activities of the traders contribute largely to the dirt in Benin City.

The Deputy Governor also appealed to the opposition political parties to criticize constructively by supporting the government’s efforts at keeping the city clean.

“The walkways are not created for market trading, ab initio it’s a crime to trade on it as there is a law on walkways in Edo state.

“So they that are trading on that ignorantly they should know that there is a law and very soon the law will catch up on them.

“You can be a progressive opposition only to the extent that you challenge government on the wrong that they do not for the good that they do.