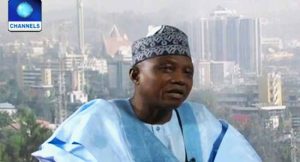 The Senior Special Adviser, (Media and Publicity) to the President, Garba Shehu says solution is on the way as the President has ordered the establishment of two military units to provide security in southern Kaduna.

This is coming as most residents in the region, are now afraid to return to their homes, following the killings in the state.

“Government has intensified a lot of activities. As we speak, there are ongoing efforts to establish two military battalions. One in kachia, one in Zango-kataf.”

Furthermore, he hinted that military had begun surveillance, while “the mobile police quadrant had been put in place – the entire place is drenched with a lot of security, so many police.

He then stated that “It would be assumptious to think that these things would just go away with the wave of a hand.

“Some rascally elements would still stray and perpetuate crime, but I think that the measures put in by the government are having effect.”

The President’s aide then urged citizens to also help in the fight against criminals and insecurity as the government alone cannot solve all the problems.

“We often make mistakes, leaving matters of security to the police and to the army, but there are enormous responsibilities that lie on all of us in our various communities.”