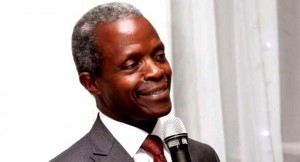 The Federal Government may have concluded that Boko Haram has been technically defeated, but there is “one thing” they say is left to properly deal a lasting blow to the menace.

To this end, the Nigerian Government and France have agreed to work together in achieving a terror free Nigeria.

According to Professor Osinbajo who stressed the need to break the ideological underpinnings of terror, “one thing left for us to deal with is deradicalisation, defeating the ‘ideology’ behind the mindless killing and violence”.

On his part, Mr Cazeneuve praised what he described as the ‘tremendous progress’ made by the President Muhammadu Buhari led administration in degrading Boko Haram and suppressing the insurgency significantly.

He pledged that France will stand by Nigeria, saying the French Government is aware of the problem and they know “it cannot be solved by countries working alone”.

Professor Osinbajo has been in France where he attended and spoke at the just concluded Global Forum on Anti-Corruption and Integrity hosted by the Organisation for Economic Cooperation and Development (OECD).