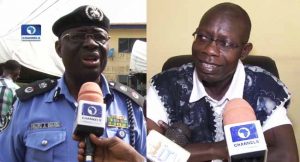 The Ambrose Ali University chapter of the Academic Staff Union of Universities (ASUU) in Ekpoma, Edo state, has called for the immediate redeployment of the State Commissioner of Police, Mr Haliru Gwandu.

The union members made this call while briefing journalists in the state capital, that one of its member was allegedly brutalised.

While the news of the alleged brutality had gone viral, the Edo Police boss stated that there was never a time that the professor came to complain about any of his men.

In another development, while parading suspected criminals at the Force headquarters, Mr Gwandu told journalists that arms were recovered from some senior lecturers at the AAU. He also accused them of mentoring young cultists.

In reaction, a representative of ASUU said the allegations were unfounded adding that it was a calculated attempt to bring the name of the institution to disrepute.

The union therefore questioned the authenticity of the allegations, asking the CP to explain how the Force came about such information.

“Where was this wonderful arrest of professors made? – How come the commissioner’s disclosure of alleged discovery of 14 dead bodies is coming on the heels of the protest of our union over the police brutalization of Professor Sunday Edeku,” the union questioned.

Currently, both parties have insisted that they are acting lawfully. However, only time would tell how the tussle would be finally resolved.

ASUU To FG: Make Food, Electricity Available As You Lockdown