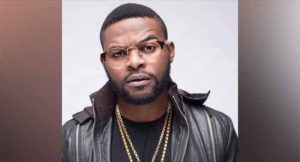 Folarin Falana, better known by his stage name, Falz (the Bahd Guy), is out with a new music video, to his song titled ‘Jeje’.

Falz announced the official release of the music video produced by Studio Magic, Directed by Mex Films and featuring Ghanaian based model, on Friday.

The rap artist who shot into limelight after his song titled Marry Me, featuring vocals from Poe and Yemi Alade, won him a nomination in the “Best Collaboration of The Year” category at the 2015 Nigeria Entertainment Awards, has continued to release major hits thrilling fans worldwide.

He has won several awards in the entertainment industry such as the Best Street Hip Hop Artiste of the Year at the Headies (2015), Best Actor in a Comedy Movie/Series at the 2016 Africa Magic Viewers Choice Awards, among others.

The 26 year old entertainer and Soft Work crooner, who currently owns an independent record label called Bahd Guys Records, has also collaborated with various artists including X3M Music’s Simi, with whom he released a collaborative EP ‘Chemistry’ on October 27, 2016.

Falz Fires Up The Internet With ‘This Is Nigeria’