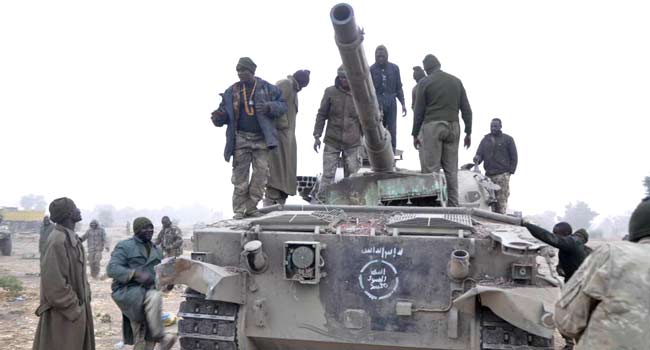 Troops of Operation Lafiya Dole recovered battle tanks and other weapons from Boko Haram terrorists in their pursuit to clear the insurgents from Nigeria’s north-east region.

Nigerian Army spokesman, Major General Sani Usman, disclosed this in a statement signed by him on Wednesday.

According to him, the success was recorded Tuesday during the ongoing clearance operations nicknamed Operation DEEP PUNCH II, in which troops had contact with the terrorists and engagement ensued.

“During the encounter, they (troops) were able to recover an Eagle Main Battle Tank (EMBT), one VBL, one AK-47 rifle, a police teargas rifle, religious books, many gas cylinders and bags of fertiliser, ostensibly for improvised explosives devices making,” Usman said.

Others are one Golf car, four Mitsubishi pickup vans, one Hiace bus, several motorcycles, as well as makeshift shelters and household items among others.

See photos of recovered items below;

World Ushers In New Year In Shadow Of Pandemic