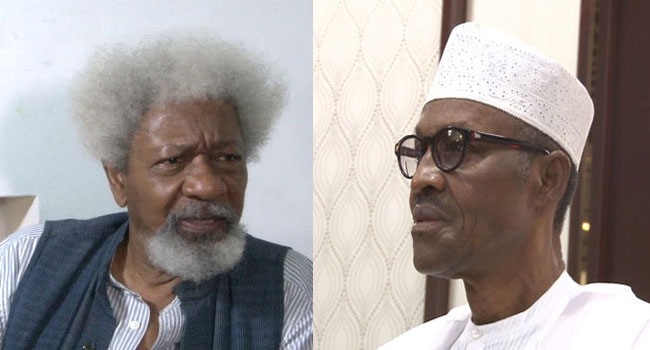 Professor Soyinka gave the advice in his speech on Tuesday in Abuja, at an event to honour Abiola – the presumed winner of the June 12, 1993, presidential election.

Although he didn’t mention any name, most Nigerians believe Soyinka was referring to the late Head of State, General Sani Abacha (retd.), who detained Abiola for years until his death in 1998 when he attempted to reclaim his mandate as president.

He said, “l will like to make a request. Mr President, since we are honouring heroes of democracy today, l will like to request that you manage to stop creating confusion in the minds of Nigerians. It is not possible to honour MKO Abiola in one breadth and admire his tormentor in another breadth.”

Earlier, at the ceremony, President Buhari formally conferred a posthumous national honour of Grand Commander of the Federal Republic (GCFR) on Abiola, the highest award in the land.

He had also honoured Abiola’s running mate in the election, Ambassador Baba Gana Kingibe, and late respected human rights activist, Gani Fawahinmi, with the national award of Grand Commander of the Niger (GCON).

The President had also tendered an apology to the Abiola family and others who lost their loved ones to the June 12 struggle.

On his part, Professor Soyinka noted that while he accepts President’s Buhari’s apology on behalf of Nigerians, he should stop confusing the people about his loyalty.

He said, “Most of what l wanted to say have been actually knocked off my mouth by one singular gesture – the presidential apology. It is a dimension which l did not expect from today’s ceremony.”

“Loyalty is all very well but loyalty can become perverse if that loyalty is retained to an individual who if he were alive today would be before the International Court of Crimes against humanity,” the Nobel laureate added.

He further accused the said tormentor of breaking the laws of the country and international laws, as well as committing crimes against humanity.

Soyinka recalled a private conversation he once had with President Buhari during which he raised the issue of honouring “a notorious corrupt ruler” by one of the most important avenues (major roads) in the nation’s capital.

He stated that the response he got from the President was not too satisfactory, stressing that the martyrs of the June 12 struggle and Nigeria’s philanthropists should be honoured in place of corrupt persons.

He added: “l do not agree that this is closure to the events of June 12.