The Lagos State Government has set up a Joint Task Force involving security agencies and stakeholders in the maritime sector to remove all containers trucks and tankers parked along the Oshodi-Apapa Expressway.

The Commissioner for Transportation, Ladi Lawanson told journalists on Sunday that the Task Force was able to free the road from Toyota to Mile 2 in an operation which lasted for 72 hours between Friday and Sunday.

He added that Governor Akinwunmi Ambode has extended the operation of the Task Force for another 48 hours, while he would also host a meeting involving all the stakeholders in Alausa on Monday to come up with a lasting solution to the menace.

“The Governor will be meeting with the Nigeria Ports Authority, Shippers Council, Tank Farm Owners, Department of Petroleum Resources, among others because that is where the problem is really emanating from.

“What we are doing now are just palliative measures and we have to solve the problem from the source. Even though this is not within the Governor’s jurisdiction but he is adopting a collaborative approach with these agencies of the Federal Government which are the root cause of the problem to look for a medium to long-term solutions in support of the palliative measure that the Governor has started,” Lawanson said. 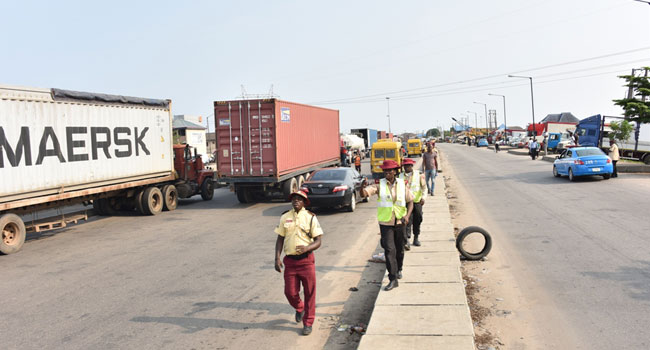 Giving further details on the operation, Commissioner for Information and Strategy, Kehinde Bamigbetan said over 2,000 articulated vehicles were removed from the road including Oshodi-Apapa Expressway, Funsho Williams Avenue and Mile 2-Orile Road and taken to seven designated holding bays.

He said the State Government has also resolved to set up a Mobile Court within the axis to summarily deal with recalcitrant drivers of articulated vehicles who may want to draw back the recent gains recorded.