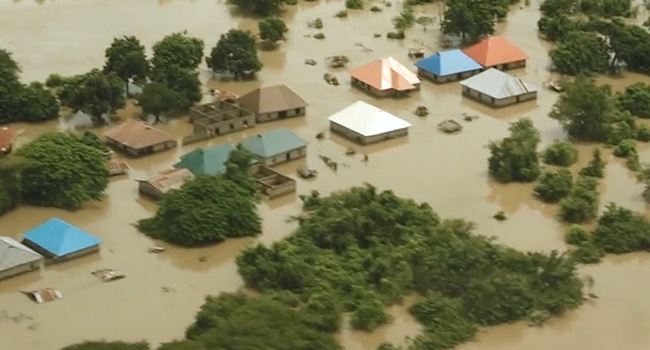 The National Emergency Management Agency (NEMA) has warned that there will be more flooding in the coming days.

This, according to the agency, is because of the rising water levels in River Niger and Benue.

Niger, Edo, Jigawa, Anambra, and Bayelsa states were all hit by floods this week with about 70 deaths reported, hundreds of homes submerged, and thousands displaced.

The Director-General of NEMA, Mustapha Maihaja, however, warned that the situation could get worse as water inflow into River Niger and River Benue is so huge that both rivers can only accommodate less than two meters of water before they will overflow their banks into nearby communities.

To prevent further loss of lives, the agency called for the evacuation of people living in communities on the floodplains.

Meanwhile, the Director of Search and Rescue at NEMA, Air Commodore Akugbe Iyamu, said the agency had placed all disaster units across the country on red alert to avoid any catastrophic disaster in the country.

He said this in Ilorin, the Kwara State capital when a team from NEMA paid a visit to the 222 Batalion, Sobi Military Cantonment, Ilorin and 303 Medium Airlift Group of the Nigeria Air Force.

The visit is part of efforts to ensure that prompt actions are taken by the Air Force immediately they receive a distress call from any part of the country where people are trapped.

On Friday, President Muhammadu Buhari had delegated authority to the NEMA DG to declare a “national disaster’’ if the anticipated flooding becomes a reality in parts of the country.

The President’s directive was contained in a letter entitled ‘Situation Report on the River Flood Along the Banks of Rivers Benue and Niger’, which was signed by the Chief of Staff to the President, Abba Kyari.

It gave “Delegation of authority to the Director-General of NEMA to activate the Disaster Response Units of the military for possible search and rescue missions”.

The President also gave the NEMA DG authorisation for “the procurement and proportionate stocking of relief materials and health-related items up to N3billion to provide for the needs of possible victims.’’

Also, President Buhari instructed the NEMA boss to provide him with regular updates.

The President’s directive follows a warning by NEMA and the Nigeria Hydrological Services Agency (NIHSA) that Rivers Benue and Niger had almost reached levels that resulted in flooding in 2012, which led to the loss of lives and destruction of property.

Hundreds Evacuated As French Villages Dig Out From Flooding