The Federal Government has approved the sum of N60 billion to support rice production in the country and crash its market price ahead of the festive period.

Minister of Agriculture, Audu Ogbeh, disclosed this to State House correspondents on Tuesday at the end of the National Food Security Council in Abuja.

“The government has approved some money to support the rice industry to bring down prices, but we are going to handle it differently,” he said.

The Minister added, “We don’t want to get into the petroleum subsidy problem, so a committee is looking at it with the Ministry of Finance.

“And we think that it is better for us to lend money to the millers, the farmers, and the distributors, at a very low interest rate so that the capital doesn’t disappear.”

Mr Ogbeh thereafter revealed some of the measure being out in place by the government to tackle the crisis between farmers and herdsmen which has claimed many lives since the beginning of the year.

According to him, the government is devising ways of ensuring that the waste products of one part are made useful to the other.

The minister explained, “We are putting in place a programme now to see if we can aggregate all the wastes from harvest – maize stalks and sorghum stalks and millet, rice stalks, beans and so on, and process them to feed the cows instead of letting them (the herders) roam around and getting into these conflicts with the farmers.”

Kebbi State Governor, Abubakar Bagudu, who is also part of the council, reacted to reports by the U.S. Department for Agriculture suggesting that Nigeria imported three million tonnes of rice.

He said, “The only official importation in Nigeria is about 4,000 metric tonnes of rice.”

“The U.S. authorities responded by saying that their assessment was based on satellite imaging of flooded areas. Even in spite of the flooding, upland rice production has been quite strong this year,” the governor added.

Meanwhile, the council also announced a decline of Foreign Exchange expenditure on food items from $1.4 billion in 2013 to about $628 million in 2018.

President Muhammadu Buhari presided over the food council meeting which held inside the Council Chamber of the Presidential Villa.

Those who also attended are the Secretary to the Government of the Federation, Mr Boss Mustapha, and Lagos State Governor, Mr Akinwunmi Ambode. 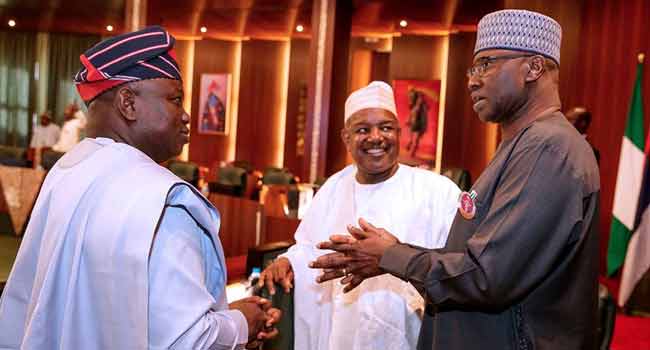 Magu Will Henceforth React To All Allegations Against Him In The Public Space, Says Lawyer

More Nigerians Stranded In France, Others To Return Home – FG