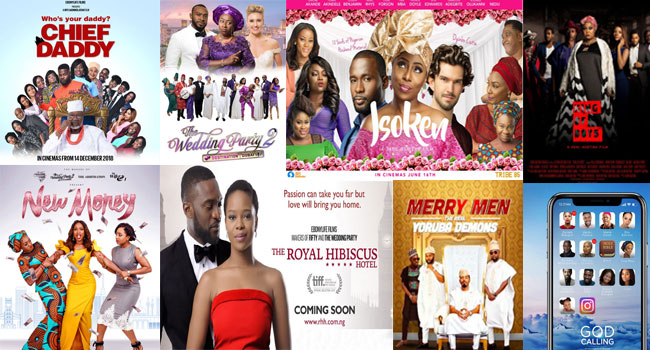 2018 was yet another big year for Nollywood as the industry continues to get better and better.

With a lot of movies increasingly hitting the big screens and receiving more recognition globally, many say the Nigerian movie industry is now truly coming into its own.

Here are 10 of the most liked and successful movies of the year according to Google’s viewer ratings, in no particular order.

This movie tells the story of four young men, considered to be Abuja’s most eligible, as well as notorious bachelors.

They have thriving businesses, fast cars, massive homes and the attention of women in no short supply.

While they are known as the Merry Men, the ladies call them the Real Yoruba Demons.

Directed by Toka McBaror and produced by Ayo Makun, the movie was released in September 2018 and is liked by 98% of the viewers.

Starring Jemima Osunde as Toun Odumosu, the movie tells the story of a young lady, who goes from being a shop girl to a billionaire,after her absentee father leaves her his empire to run.

Directed by Tope Oshin, the movie was released in March 2018 and liked by 92% of the viewers.

Veteran actress Genevieve Nnaji stars in this flick as Adaeze Obiagu, a young lady who has to step up to the challenge when her father is no longer able to handle the company due to health issues.

Her father Ernest Obiagu (Pete Edochie), leaves the company in the hands of an uncle and both of them have to fight to save the company from a huge debt or lose it altogether.

“It highlights the various challenges faced by women, particularly in male-dominated industries,” she told Women and Hollywood.

Online movie streaming platform, Netflix, also announced that it acquired the worldwide rights for the movie.

According to Google, 96% of viewers liked the movie.

This movie tells the story of a young rebellious heir, Bassey Otuekong (Banky Wellington), who is sent to Bauchi for his NYSC assignment as a punishment and as a way of humbling him, while also being groomed to take over his father’s company.

It explores love, friendship and family politics, all of which collide, creating memories to last a lifetime.

It hit cinemas in December 2018

The romantic comedy starring Banky W as (Dozie) and Adesua Etomi as (Dunni) is a sequel to ‘The Wedding Party’, which became a monster hit after its release in December 2017.

The story is about two people genuinely in love and the unnecessary interference of family members as well as the hassles of inter-cultural marriages.

While the first movie explores the flamboyant Nigerian wedding culture, the sequel, which is also full of humour and warmth, captures the concept of destination weddings, which is gradually gaining ground among Nigerians.

The movie has remained a favourite for many, despite being released on December 15, 2017, and is one of the top trending movies of 2018.

Directed by Niyi Akinmolayan, it was liked by 93% of viewers according to Google.

In this romantic comedy, a disillusioned London chef, Opeoluwa (Zainab Balogun), visits Nigeria and struggles with her matchmaking mother as well as in restoring the family’s rundown hotel.

She’s heartbroken as she discovers her new lover, Deji (Keneth Okoli), is working on a deal to buy the hotel.

An Ebony Life Films production, the movie which was directed by Ishaya Bako had its world premiere on September 9, 2017.

It was then officially released in February 2018 and is liked by 94% of the viewers.

Nigerian Immigrant Gary Barbar (Jimmy Jean-Louis), works as a teacher in the United States and is quite successful.

However, from time to time, he suffers violent flashes of visions and nightmares of a past that he knows nothing about.

His entire life and aspirations eventually hinge on finding the truth and meaning behind the nightmares.

In trying to find answers, he returns home to Benin City but is totally unprepared for the complications that await him.

Esohe, directed by Charles Uwagbai, is an epic film that explores themes of reincarnation, love and the supernatural.

This movie follows the story of Alhaja Eniola Salami (Sola Sobowale), a businesswoman and philanthropist with a promising political future.

As her political ambitions see her outgrowing the underworld connections responsible for her considerable wealth, she’s drawn into a power struggle that threatens everything she holds dear.

To come out of this on top, she is caught up in a game of trust and ruthlessness.

The movie was directed by Kemi Adetiba and is her second film after her directorial debut, The Wedding Party.

The movie tells the story of billionaire industrialist Chief Beecroft, a flamboyant benefactor to a large extended family of relatives, household staff and assorted mistresses.

He lives extravagantly, until the day he dies suddenly and the ‘bullion van’ stops.

“Chief Daddy” also explores the chaos caused by having numerous children from different women who were not aware of the existence of one another, until their father’s death.

Directed by Niyi Akinmoloyan, the movie was released on December 14, 2018.

According to Google, it is liked by 96% of viewers.

This is a movie that explores themes of faith, spirituality, and self-discovery.

Starring Zainab Balogun, the story looks at the life of a young woman, Sade, her family, and her faith through the lens of an unconventional encounter with God in the modern age.

After suffering a personal tragedy, she is taken on a journey of self-discovery and faith which transforms the lives all those around her.

“Lara And The Beat”

This movie tells a story about the young and beautiful Giwa sisters caught in the center of a financial scandal with their late parents’ media empire.

The sisters are forced out of their privileged bubble, and must learn to build their own future and salvage their family’s past.

Produced by Tosin Coker, the movie was released in July 2018 and it is liked by 94% of the viewers.

2020: A Pandemic, Lockdown And Virtual Year