Taraba State is one of the states in the Northern region of Nigeria not particularly known for political violence as experienced in some other states in the area, although the state has had its fair share of the turmoil occasioned by the farmers and herders crisis.

However, in the run up to the 2019 General Elections and after, the state has been engulfed in political violence, resulting in loss of lives and properties.

The latest started with the celebration of victory by the supporters of the incumbent governor, Darius Ishaku, who was declared the winner of the March 9, 2019 governorship election in the state.

What would have passed for a joyful occasion turned violent when hoodlums believed to be sponsored by a political party hijacked the event, burning down people’s houses in the state capital, Jalingo, leaving a number of people injured.

In a bid to nip the development in the bud and douse the tension in the affected areas, the state government immediately imposed a dusk-to-dawn curfew in the state.

The government thereafter extended the curfew to 24 hours to curtail any breach of the peace, sensing that the dusk-to-dawn curfew was not yielding any success, as the attacks continued on some other parts of the state.

The curfew was later relaxed to last from 4:00 PM to 6:00 AM, a window which the hoodlums cashed in on to wreak more havoc in the state.

When the crisis erupted in the Sabon-Gari area of Jalingo, with the hoodlums burning down houses, the residents fled their homes. Those who could not go very far, took refuge at the Mobile Police base in Sabon-Gari.

For some of the victims, it was an unfortunate situation they had to contend with, in view of the number of years they had all lived together in the community, only to be torn apart by political differences.

“When they first came, I heard the military beating some people behind my house, it was then that other security agencies came, and said the women should leave and let only the men stay behind,” narrated one of the victims, Samaila Awumsukwe.

“On discovering that my children and wife had left and I’m the only one left, I said to myself, how can I be here and these soldiers will return and start beating me like my neighbours? So I decided to escape and come to the roadside when the Commissioner of Police came around and promised us that more security to our lives and property will be provided,” he added.

More confusing for the people was the alleged involvement of the army in the crisis that was meant to be the aftermath of a political exercise.

“I sneaked out and got to this church. We are scattered by some group of hoodlums who are attacking us in our houses. The military personnel came and were beating us in our homes.

“We are appealing for a safe return to our places of abode and need to settle whatever dispute between us once and for all in order to have a peaceful community,” pleaded Samaila Awumsukwe. 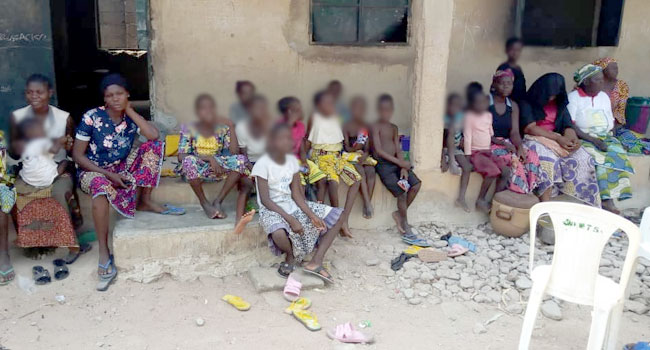 Some security personnel also appeared to have been caught in the middle of the of the crisis, as narrated by a police officer, Idris Yahaya, who was posted to safeguard lives and property at the INEC Headquarters in Jalingo, only to be called and informed that his family and house were under attack.

He rushed home and succeeded in evacuating his family, but decried the level of destruction on his house, which was part of his achievements in the 20 years he has spent in the Police Force.

Just when it was thought that the situation had been brought under control, the crisis spread to the Water Board area of Jalingo, leaving the residents in shock

The residents, who fled to refuge at the LCCN Church Jankada and CRCN Magami,   alleged that the military officers that came to their area were all fake. They demanded the withdrawal of the soldiers from the area, alleging that they killed their youths and forced them to flee.

“Are the soldiers here to settle dispute or to beat our husbands and youths?” asked a female victim, Regina Alfred, who claimed that she narrowly escaped to the church. “I can categorically tell you that the soldiers carried out the beating and shooting,” she added

“Currently, as I speak to you, we do not know where our husbands and children are; we only escaped narrowly. Our children do not have mobile phones, let alone us knowing where they are. It is indeed a pathetic situation we have found ourselves,” she added.

Alfred further alleged, “These are not true soldiers, because when a soldier pursues an individual and such an individual surrenders with his hands up, he will leave him.

“But a soldier with knives, machetes, pursues you into your room, and still attacks you, shows clearly that it is fake.” 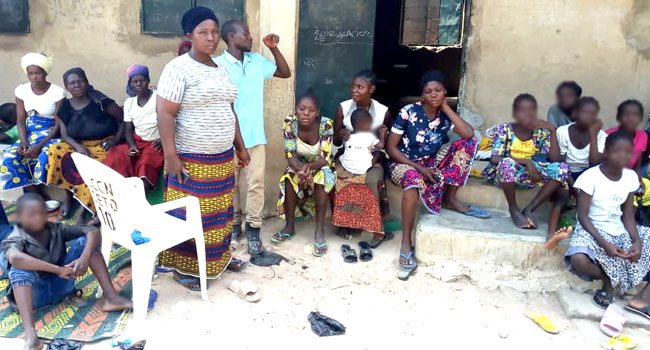 The pastor in charge of one of the churches, Reverend Kinison Alfred, told Channels Television that the victims were rescued and brought in by a group of police officers.

“Yesterday (Wednesday), in the afternoon, I discovered some good Samaritan young policemen just came into the church premises asking for the pastor, just to draw my attention.

“Coming out, I just saw a crowd of people some in blood, some crying, some carrying children, and I asked what happened, only for the policemen to explain to me that these set of people narrowly escaped in Tudun Wada area of Water Board. It was with the help of these policemen that they were rescued.”

But the Commanding Officer in Baruwa, Gashaka Local Government Area, Lieutenant Colonel Mohammed Adamu, said he and his men fought the hoodlums to bring sanity to the area.

Adamu, who is also in charge of Jalingo, denied the presence of fake soldiers in the state capital as claimed by the residents.

“I was there myself yesterday (Wednesday) to battle these thugs. I can confidently tell you that what they are saying is not true, it is just an allegation,” he insisted.

Although, relative peace has been restored in the state capital, Jalingo, as military officers now parade the streets to maintain law and order, the coming days will determine whether this is enough to calm the tension triggered by the outcome of the just-concluded elections in Taraba State.