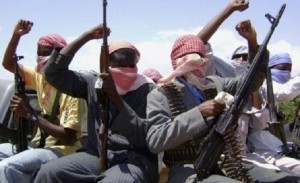 Gunmen suspected to be members of the Boko Haram Islamist militant group have killed a first class traditional ruler in Borno State, the Emir of Gwoza, Alhaji Idrisss Timta.

Official sources said on Friday the gunmen snatched the Emir of Gwoza, Alhaji Idriss Timta, and the Emir of Uba, Alhaji Ismaila Mamza, from vehicles on the road at Zhur, a remote community in the southern part of Borno state.

A security source and a Borno State government official told Reuters that they were on their way to a funeral.

One of the sources said military had been deployed to the area to rescue the hostages, although such missions were always fraught with danger.

However, the Borno State Government, in a statement on Friday, said that Alhaji Idrissa Timta had been killed by the sect members.

According to the statement, the Emir was killed around 9:00am on Friday in a bloody attack by suspected members of the Boko haram sect along Tashan Alade on the way to Biu town, headquarters of Biu Lo‎cal Government Area in Southern Borno State.

“The late Emir was in company of the Emir of Askira, Alhaji Abdullahi Ibn Muhammadu Askirama and Emir of Uba, Alhaji Ali Ibn Ismaila Mamza, all of whom drove in the same vehicle as they headed to Biu to pick the Emir of Biu so they could all drive in convoy to Gombe ‎State to attend the funeral of the late Emir of Gombe who is scheduled for burial in Gombe today.

“The late Emir of Gwoza had visited his counterpart, the Emir of Uba ‎yesterday and passed the night in Uba ahead of their planned trip today. The two Emirs were this morning, joined by the Emir of Askira. The three drove in the same vehicle with the intention of going to Biu to be joined by their counterpart in Biu.

“Unfortunately as they were driving in convoy to Biu, they were ambushed by gun men around Tashan Alade, soon after passing Garkida. The gunmen came after the convoy, specifically targeted the vehicle conveying the three Emirs and opened fire. The Emir of Gwoza was unfortunately killed by the attackers while the Emirs of Askira and Uba escaped unhurt,” the statement read.

A policeman in the convoy was shot by the attackers but he survived the attack.

Despite a year-long military offensive against the Islamist group, Boko Haram, which is fighting to reinstate an ancient Islamic caliphate in northern Nigeria, has been able to run riot across the north east – and bomb cities in the north east.

The abduction is coming a day after the Nigerian President, Goodluck Jonathan, in a Democracy Day message, said he had ordered a full-scale operation against Boko Haram Islamist militants.

He had said “days of peace will come again”, assuring Nigerians of his government’s commitment to ending the insurgency.

Despite military operations in the area, over 200 girls abducted by the members of the sect on April 14 from their dormitory in the Government Girls Secondary School in Chibok, Borno State, are still missing.

But President Jonathan also reassured the parents of the schoolgirls that their children would be freed.

Boko Haram had in a video of the girls released few weeks ago demanded for the release of members of the group held in different detention camps cross Nigeria in exchange for the girls.