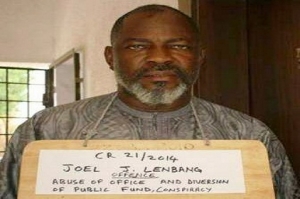 The Accountant-General was arraigned on Wednesday before Justice Donatus Nwabueze Okorowo for defrauding the Taraba State Government.

Lenbang, was docked on an 8-count charge, including obtaining false pretence and abuse of office, offences contrary to and punishable under the Advanced Fee Fraud and Other Related Offences Act, 2006

EFCC’s Head, Media and publicity, Wilson Uwujaren confirmed that  Mr. Lenbang allegedly disguised and withdrew monies for sundry payments on behalf of the Ministries, Departments and Agencies (MDAs), as well as payment of Bank Commissions on Turn Over (COT) and Value Added Tax (VAT) which became a monthly affair making a total sum of N1,567,226,557.081 between January 2012 and December 2013.

Although Lenbang pleaded not guilty to the 8-count charge levied against him, the prosecuting counsel, Al Qasim Ja’afar, applied for a date to commence trial but the counsel to the accused filed a motion for bail.

The Judge, Okorowo adjourned the case till July 11, 2014 for hearing and remanded the accused in prison.

The petition, according to him, triggered investigation of the lifestyle of some of the officers mentioned in the petition and who were believed to be living above their means