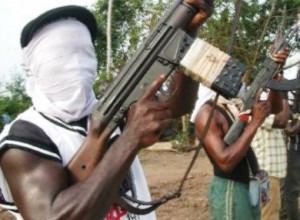 Several people have been reported killed as gunmen suspected to be members of the Boko Haram attacked Damboa in Borno State on Friday morning.

The gunmen were said to have stormed the village at about 5AM, according to a vigilante official in Maiduguri, Abbas Gava, who said that he spoke with some of his men in the Damboa village.

According to him, since the Boko Haram sect attacked security formations in Damboa about two weeks ago, only a handful of youth vigilante group, known as Civilian-JTF, and some few vigilante officials were available to protect the people.

The Boko Haram gunmen were also said to have taken over the highway and continued to engage soldiers in ambush attacks that have forced them to return to Maiduguri on two occasions.

“Since the attack, Damboa has no Police or soldiers, it is only the vigilantes that are there and we know their limitations”, Mr Gava said.

He said that the “casualty could be very high because my contacts in Damboa said they are still picking and piling the corpses. But many houses, nearly half of what remains of the several attacked town has been burnt”.

A senior security personnel, confirmed the attack to Premium Times but said that there were “no details on extent of damage or casualty yet”.

U-23 AFCON: Nigeria Bounce Back To Beat Zambia