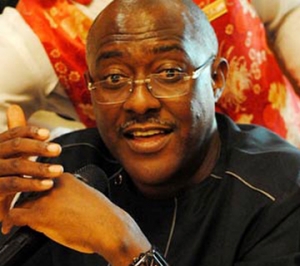 The People’s Democratic Party is not taking the statement by the Chairman of the All Progressives Congress on the backers of insurgents in Nigeria lying down.

Less than 24-hours after John Oyegun accused the PDP and its leadership of knowing the sponsors of Boko Haram, the PDP has condemned the APC leader’s accusation, saying the statement is completely lacking in validity, character and intellectual content befitting of a National Chairman of a political party.

The PDP, in a press statement released on Wednesday by its National Publicity Secretary, Olisa Metuh, said that Mr Oyegun has succeeded in further exposing the desperation of the APC to launder its image through renewed propaganda and blackmail.

The PDP further said “Nigerians have since noted the pattern and timing of violent attacks against our people which betray a trend tailored against the PDP and the Federal Government and provide impetus for the APC to find a voice and thrive.

“They know that it has become a recurring decimal that whenever the PDP or the Federal Government records or is about to record a major milestone, insurgents launch attacks on the people”

The PDP, however, advised the APC to be nationalistic in its dealings and shun statements of divisive tendencies.

The All Progressives Congress, APC, had, on Tuesday, challenged President Goodluck Jonathan to act decisively and hand two alleged sponsors of the Boko Haram group to the International Criminal Court (ICC), The Hague, for investigation and prosecution.

The party said that a foreign negotiator engaged by the Federal Government had revealed that a former governor and a retired General were sponsors of the Boko Haram sect.

Chairman of the party, John Oyegun, who made the disclosure, insisted that the APC was not behind the Boko Haram sect and demanded that the Federal Government should act immediately to end the growing insecurity in the North-East.

Mr Oyegun, who was speaking during a press conference in Abuja, further noted that “Boko Haram sponsors have been exposed. They are within the ruling PDP. They are friends of President Jonathan. He cannot pretend not to know who they are and what they have done and are still doing.”

We Should All Secure Our Countries, Buhari Tells African Leaders