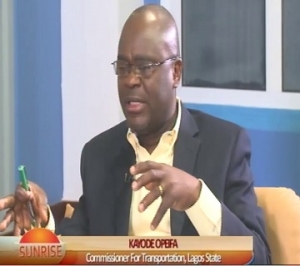 The Lagos State Commissioner for Transportation, Mr Kayode Opeifa, on Saturday, warned that the state needs to do more to enforce the law restricting motorcyclists from plying a total of 475 roads.

“We hav not changed anything about the restriction law, it is still in force”he said, adding that “Lagos State is not the only state with such restriction in place.

“What we seem to notice that there are violations and outright disregard for the law and this is a sign that we need to do more to enforce the law”, he said.

He however said despite the restrictions, “you can ride any bike above 200cc on all roads” but warned that “it must not be for passenger carrying purposes”.

He further noted that it is the responsibility of all security agencies in the state to enforce the restriction law but noted that only the Nigeria Police has been doing so “since we started in November 2012 and they have been doing their best”.

He however maintained that people who don’t want the best for the State “started making media publications describing the operations of the police as harassment and extortion” and that “naturally set in some issues and it got to a point it became difficult”.

A youth activist, Lukman Lawal, said most of the youths that have chosen to ride motor-cycles for commercial purposes are doing so because of the “failure of the government” to provide adequate jobs.

He however noted that “any law that will better your health, welfare and make your security improve is a good law” adding that “to that extent you (okada riders) do not have any business with those roads.

“It is a fantastic law” he adds.

A former Trade Unionist, Mr Linus Okoroji, who has been carrying an Okada accident inflicted wound for eight months, on his part said he supported the Okada Restriction Law at the first instance.

He said no “Nigerian will be proud to join Okada as a means of transport, even in the rural areas let alone the urban areas about 25 years ago”, wondering how the country “managed to come to this level.

“As far as I am concerned, I am one of those who supported the law at the first instance”, revealing that “my colleagues in the civil society fought against me and walked me out of a meeting.

“But I am strong in my conviction that the law should remain”, he added.

The state government had on August, 2012 signed the Lagos State Traffic Law in to law. The objective of the legislation was to provide for road traffic administration.

It also seeks, among others, to restore sanity in the state transportation system of the state.