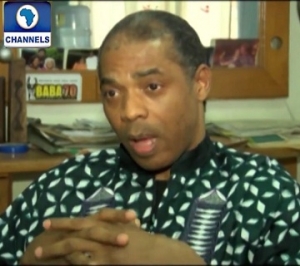 Afrobeat Maestro, Femi Kuti, has spoken out on the much publicised paternity test that proved that his two children were not actually his.

In an interview with Channels Television’s entertainment correspondent, Femi Kuti explained what led to the test.

The son of late Fela Kuti, however, said that the incident was not a recent one but something that had happened eight years ago.

He, however, did not give the name of the woman involved, as he kept referring to her as his girlfriend.

“They wrote it as if it happened yesterday so that I will feel very sad. Do i look Sad to yo? Even then i was not even sad.

“It happened eight years ago. One of my girlfriends was talking on the phone with one of her lovers and I entered the room took the phone and discovered she was talking to a lover.

“And there was already a rumour in the Shrine that one of my children does not look like me and my sister advised me to address the issue. For security reasons and for the sake of the family, I took all my children for a DNA test and I found out that two were not my children,” he said.

Femi Kuti’s management team, Chocolate City, had earlier released an official statement, addressing the rumours about him carrying out a recent DNA test on his children.

In the statement, the group admitted that it was true but said that it was an excerpt from an interview that Femi Kuti granted some eight years ago.

The group stated that during the interview, Femi spoke on the identity of five of his children and then revealed that two of these 5 children were not his and that he had since making this discovery returned the children.

Watch The video for the full interview.