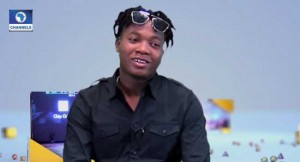 Ayoola Oladapo Agboola, now known to the world as Kiddominant, has revealed how he became one of Nigeria’s most sought after music producers.

In a chat with Channels Television, he talked about growing as a music producer and how he met Davido.

His first real shot at stardom came with the song, Rihanna, singer Orezi’s break out single.

Since then he has been working with top artists around Nigeria including Nigerian superstar, Davido for whom he produced the hit tracks, ‘Dodo’ and ‘The Money’ which featured YBNL Boss, Olamide.

Kiddominant said he met Davido in 2014, through his friend, Danagog, who is also a signed artist to HKN gang.

He disclosed that back in 2014, Davido wanted to sign Orezi, and suggested to work with him since Orezi was going to be signed to the HKN gang.

The signing of Orezi to the label didn’t work out but it did not affect the relationship between Davido and Kiddominant.

The music producer, who his presently working on Davido’s highly anticipated sophomore album, said that the album is going to be massive and the world should expect something very different.

He also disclosed that the world should expect more international works from him very soon.