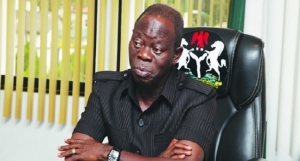 The Edo State Government has deposed Mr Anselm O Edenojie as the Ojuromi of Uromi.

His deposition is contained in a letter signed by Secretary to the State Government, Prof Julius Ihonvbere, dated November 9, 2016 and addressed to “Mr Anselm O. Edenojie”.

Entitled ‘Deposition from Office as Ojuromi of Uromi: Addendum’, the Government stated: “please be informed that the initial Exco decision of 26th October 2016 has been further affirmed,

“Consequently, you have been deposed as the Ojuromi of Uromi pursuant to Section 28 (i & ii) of the Traditional Rulers & Chiefs Law, 1979.

“Kindly, therefore, disregard our letter of 4th November 2016 on the subject “Re: Letter of Apology to Edo State Government.”

The Edo State Government had earlier suspended the monarch, the Onojie of Uromi, HRH Anselm Aidenojie, from office for seven days.

The suspension took effect from October 26 when the letter was read, and lasted till November 1, 2016.

The letter which was titled “Suspension from Office as Traditional Ruler”, was signed by the Secretary to the State Government, Prof. Julius Ihonvbere.

According to the letter, the suspension from office was based on the following reasons among others:

“Your unprovoked attack, inflicting grievous bodily harm on one Mrs Betty Okoebor on September 28, 2016 in full public glare to the embarrassment of those present and causing disgrace to your otherwise esteemed office.

“Your refusal, even after two weeks, to respond to a query issued by the appropriate authority within the stipulated 72 hours, demonstrating total disregard and disrespect for constituted authority.

“Travelling outside the country without appropriate permission in further demonstration of your disregard for extant regulations and laws.”

The statement demanded that he tenders “unreserved apologies” to his victim, Mrs Betty Okoebor and the Government of Edo State within the 7-day suspension period.

“However, if within the said number of days, no public apology in tendered by your very self, you will stand deposed as the Onojie of Uromi,” it threatened.

Bail Application: Adoke, Two Others To Know Fate On Thursday