I Return The Label Of Looter Back To Sender – Fani-Kayode 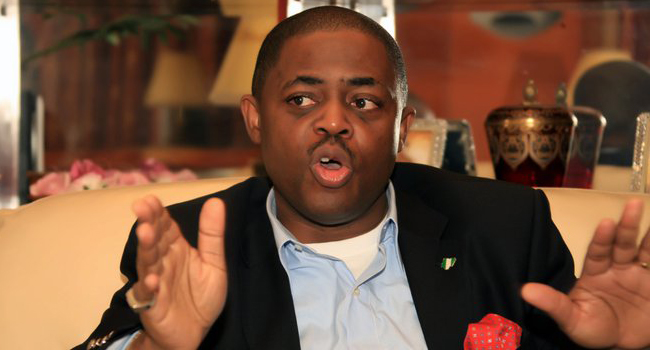 Former Media Director for ex-President Goodluck Jonathan Campaign Organisation, on Monday, reacted to the Federal Government’s list of alleged looters saying he returns the ‘label’ back to the sender.

Femi Fani-Kayode, in the list of alleged looters released by the Federal Government on Sunday, is alleged to have looted the sum of N866 million but in his reaction,  he said described this as a false claim.

“I wish to make it clear that this is nonsensical and utterly shameful, and I hereby reiterate the fact that I am totally innocent of any wrongdoing. I reject the false label of “looter” and I hereby return it to the sender.

“The Federal Government claims that I “looted” N800m from government coffers. This is false. I did not receive, and neither was I ever given one kobo by any government official, government agency or government parastatal during President Goodluck Jonathan’s tenure,” he said.

Fani-Kayode, who is also a former Minister, explained that the money given to him was by Director of Finance of the Jonathan Campaign Organisation, Esther Nenadi Usman was solely for the conduct of presidential elections campaign.

“Mrs Usman, who was Minister of Finance during the Obasanjo’s government,  was neither a member of Jonathan’s government and neither did she manage, handle or touch any government funds in her capacity as Director of Finance of the Jonathan campaign.

“The money she made available to me came from a private company account which was used to house contributions made to the Jonathan campaign by party supporters after series of fundraising event.

“These were private funds and not public funds and neither can anyone expect us to have run an election in 2015 without any money. You do not run election campaigns with sand but with money,” Fani-Kayode explained.

The prominent lawyer alleged that the Buhari administration’s war against corruption is selective and politically-motivated witch hunt adding that the released list is a violation of Nigeria’s constitution.

“Not only is this a violation of the constitutional provision that says that an accused person is deemed innocent until they are proved guilty by a duly constituted court of law but it is also highly prejudicial to the criminal cases that they are or may be facing.

“This is a crude and sordid attempt to intimidate the judges and influence the outcome of the cases which are before them and also to compel them to give the judgement that the government wants,” he claimed.

Fani-Kayode said it is the trite law that only a court of law can declare a man guilty or declare him a thief or a looter and not Buhari and his government. He questioned if anyone can get a fair trial in a country when the government has already pronounced them guilty before the world?

‘I Disappointed Myself’: Fani-Kayode Apologises For Harassing Journalist In Calabar