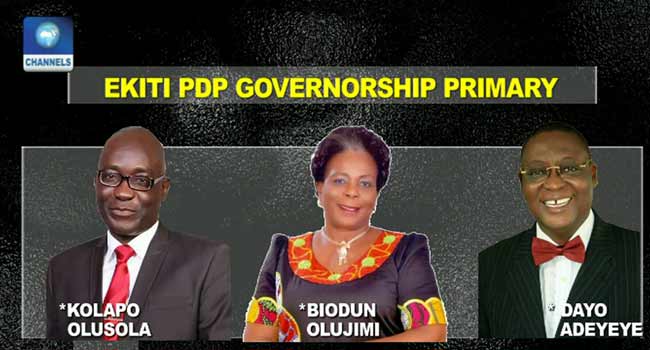 The Peoples Democratic Party (PDP) in Ekiti State is holding its governorship primaries across all the 26 local government areas of the state today.

More than 2,100 delegates will be participating in the exercise as the accreditation process is already underway.

The delegates are made up of 1,585 statutory members of the party, and 547 National Ad-Hoc Committee Members.

They will determine the fate of the three contenders of the party’s governorship ticket.

Whoever emerges as the winner of the primaries among the three aspirants would be the PDP flagbearer at the July 14 governorship election in the state.

Ahead of Tuesday’s primaries, the national leadership of the PDP had appealed to the delegates to the exercise, as well as members and supporters of the party in the state to continue in their resolve to work together to ensure a smooth and hitch-free poll.

In a statement by the PDP National Publicity Secretary Kola Ologbondiyan on Monday, the party commended all stakeholders, particularly the aspirants for the spirit of sportsmanship being displayed in their commitment towards a peaceful and free credible process.

It also applauded the stakeholders in the state for keeping to their resolve to work together to ensure the victory of the party at the main election, irrespective of the outcome of the primary elections.

The PDP had also restated its resolve to be transparent and to ensure an all-inclusive playing ground for all aspirants in all the processes leading to the governorship primary.

It, however, asked the members in Ekiti to remain vigilant and give no space to external forces whose aims were to disrupt the peace of the state.