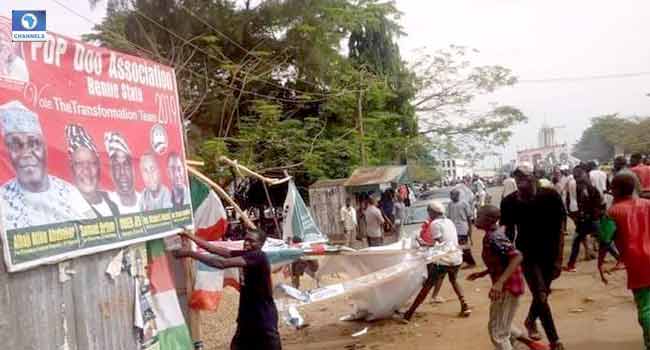 The youths were said to have caused mayhem in the state capital Markurdi and other towns following the destruction of the campaign materials.

Reacting to the development, the state governor, Samuel Ortom, has called on the residents to be calm.

He accused Senator George Akume of propelling the youths to embark on the destruction of PDP campaign materials after he lost his senatorial seat.

.According to Governor Ortom,  since 1999, Mr. Akume has been winning elections but those he defeated never went on a rampage in town to incite youths against him.

He described the situation as a regrettable and unfortunate one thereby commending the people for restraining themselves from retaliating.

He urged the people of Makurdi to go about their normal activities as security operatives will arrest anyone found to be fomenting trouble.